Mysteries seem like a genre that could be created only by a fictional author like Arthur Conan Doyle in his infamous Sherlock Holmes novels but the following cases in particular seem to outwit not only our most beloved authors of this genre but also most beings deemed human. Myths based around places always travel far and wide and such is the case with the places listed below as they continue to confound even the most learned scholars and scientists who, in a bid to unravel these mind-boggling mysteries, stumble upon their paths to trace the origins of these obnoxiously inexplicable phenomenons. Sitting pretty at an altitude of 14,000 feet, Magnetic Hill is located on the Leh-Kargil-Baltic National Highway in the Trans-Himalayan region. Sindhu river flows to the east of Magnetic Hill and makes the surrounding a picture perfect frame. Blessed with amazing natural beauty and mysterious magnetic abilities, the magnetic road in Ladakh is where travelers stop by to experience the strange, gravity-defying phenomenon. A yellow box marked on the magnetic road, few meters away from the Magnetic Hill indicates that the vehicle must be parked in neutral gear. It is from here that the vehicle starts to move at a speed close to 20 kmph.
Theories surrounding the Magnetic Hill in Ladakh propose a different logic for this strange wonder of nature and are backed by strong reasoning, barring superstitions like ‘the magnetic road is a stairway to heaven’.

Every year as the ice melts in Roopkund, a glacial lake located at an elevation of 16,500 feet, hundreds of human skeletons are seen floating. Rediscovered in the year 1942 by a forest ranger, the skeletons in the Roopkund Lake have since then been shrouded in mystery. With the help of forensics and radiocarbon tests, researchers believe that the corpses are around 1,200 years old. Nobody knows for sure who these people were, and what they were doing in such an inhospitable region of the Himalayas. According to popular folklore, the skeletal remains are of King Jasdhawal of Kanauj, his pregnant wife and hundreds of servants, who were headed to Nanda Devi shrine on a pilgrimage. However, before they could reach their destination, they were caught in a terrible hailstorm, with hailstones the size of cricket balls. Unable to find any place to hide, the entire group perished near the lake.

Originally built in the 15th century, the Vittala Temple is one of the most extravagant pieces of architecture in Hampi. However, what sets it apart from some other equally glorified temples around the country is a collection of 56 musical pillars, which produce musical sounds when tapped gently. During their rule, the British were so intrigued by the pillars’ music producing ability that they cut two pillars into half to check if anything was inside the seemingly hollow pillars of granite. If you are interested, you can still check these two pillars inside the temple complex. Over the years, curious visitors damaged several other musical pillars by regularly tapping them. To protect any further damage to this heritage site, tapping on musical pillars is now forbidden. Built in the 17th century, Bhangarh Fort was a hub of activity in Rajasthan. According to legend, it was so beautiful that the Pink City of Jaipur was modelled after its design. However, the fort’s good days ended soon and now the Bhangarh Fort is recognized as one of the most haunted places in India. So much so, that even the Archaeological Survey of India’s notice board near the fort, forbids tourist entry between sunset and sunrise. Some call it a curse, others believe that the place is home to the evil soul of a magician who was in love with the princess of Bhangarh. Although there is no evidence to prove any of the rumours, tourists report a sense of uneasiness on entering the premises. 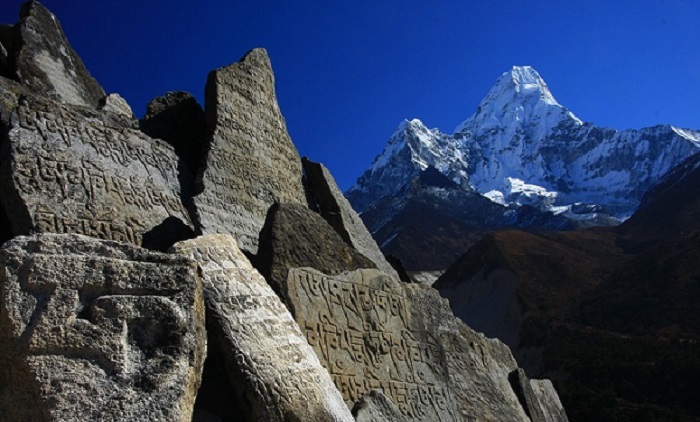 The snow-capped peaks of the Himalayas hide mysteries in plenty. One mystery that stands out from the rest is that of a mysterious city of immortal beings, known by several names such as Gyanganj, Shambala, Siddhashram or Shangri-La. It is believed that this place hides from sight and modern mapping technologies, by camouflaging itself or it exists in a different dimension altogether. However, according to legend, the immortal beings who live here not only influence the proceedings of the world in subtle ways, but also guard several secret spiritual teachings of all religions. 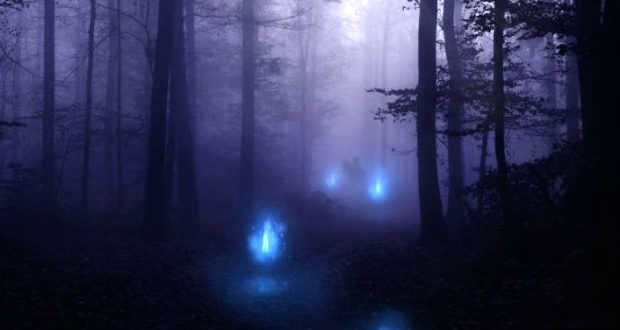 There have been many sightings of unnatural glowing lights of different colours hovering over the marshes in West Bengal. Referred to as ‘Aleya Lights’ for many years now, these lights are a nightmare for fishermen, as they usually end up confusing them and they would lose their way. In many cases reported till date, various fishermen have even lost their lives due to these strange lights. These marshes are some of the most mysterious places in India owing to this unexplained phenomenon. Scientists suggest that these lights are essentially ionization of methane over the marshes that forms out of the decaying organic matter present in abundance in these bogs. 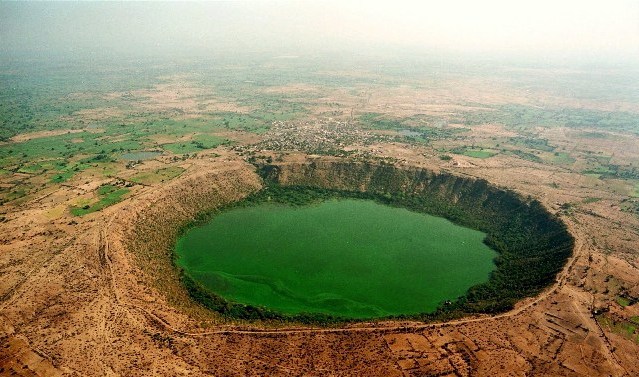 Lonar, an unremarkable village around 140 km from Aurangabad, is home to a highly remarkable meteor impact crater. Recognized as the only hyper-velocity impact crater in basaltic rock in the world, it has a lake inside it that is alkaline and saline at the same time. To add to the science fiction elements, no one knows the source of the perennial springs that feed the lake and what lurks at its murky bottom. Moreover, compasses don’t work in many parts of the lake and somehow the unique chemical composition of its water supports several microorganisms that are rarely found elsewhere on our planet.

Kongka La Pass is a low-ridge pass, lying in a disputed border area between India and China, at an elevation of 16,970 feet. Although neither Indian nor Chinese armed forces patrol the region, locals on either side of the border believe that the area is inhabited by extra-terrestrials. Reports ranging from UFO sightings to sightings of strange humanoids are quite common here. Dumas is actually a village situated at the distance of 19 KM from the city of Surat, Gujarat but its beach boasts ofspooking people during the night when whispers of dead people are heard. People strolling on the beach hear whispers and find no one when they look around for the source. There have even been reports of disappearances on the beach. The beach was previously a burial ground for Hindus, and thus it is full of spirits of the dead. Maybe it’s the theory that makes it one of the mysterious and haunted places in India. Kodinhi, a small village in the Malappuram district of Kerala, just 35 kms south of Calicut, wouldn’t have entered international spotlight if it wasn’t for the unusually large number of twin births that are regularly reported here. Also known as the ‘Village of Twins’, Kodinhi has more than 200 pairs of twins and two sets of triplets.
What’s interesting is that women from Kodinhi who are married outside this village also have multiple births! Although most researchers haven’t been able to determine the reason behind this mystery, some doctors do believe that the answer lies in the chemical makeup of water in the area. The Karni Mata Temple is one of the most holy sanctums, but little do people know that it is also one of the most mysterious places in India. The temple is home to over 20,000 rats. Revolting as it may sound, one is not allowed to kill, hurt, or even scare them away. These rats, or ‘kabbas’, as they’re called there, are considered to be highly auspicious, are worshipped, and safeguarded, which is why they hold more value than the humans visiting the shrine.The rats are believed to be the reincarnated relatives and family members of Karni Mata. In fact, the rare, white mice at the place are considered to be her sons. 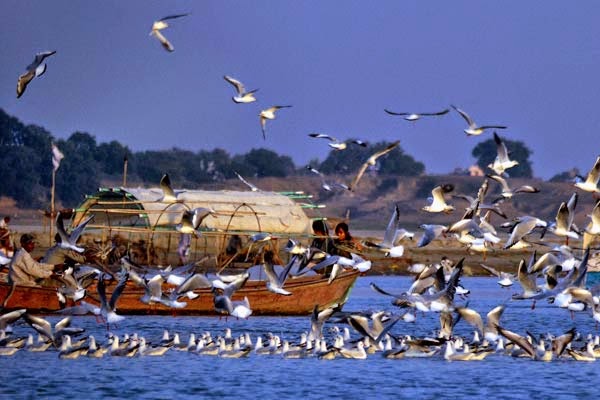 Jatinga, a small village in Assam, has everything that you can expect in a peaceful holiday destination. However, instead of its lush greenery and the backdrop of mountains, Jatinga is famous for a mysterious phenomenon that happens every year during the late monsoon months. Right after sunset, when locals are busy preparing for the night, hundreds of migratory birds commit mass suicide here. This happens every day. To no surprise, the local population gives a spooky theory that evil spirits in the sky are responsible for the event. Quite naturally, ornithologists aren’t satisfied with this explanation and have come up with their very own scientific theory. They state that the dense monsoon fog and high altitude daze birds. When these dazed birds try to make their way towards village lights, they end up hitting trees and buildings, resulting in death or serious injuries. However, there is no one to explain why these birds fly at night, and why they get trapped in the same place every year. Shani Shingnapur, a small village located 35 kms away from Ahmednagar, is famous for its Shani temple. But that’s not all that is famous about this village. None of the houses, schools, and even commercial buildings in this village have a door, or even a door frame. In addition to this, not a single crime has ever been reported here.
The villagers have undying faith in Lord Shani and believe that the near zero crime rate in the village is all His doing.

Agrasen ki Baoli was originally built by Maharaja Agrasen in the Mahabharat era. But later, the Agrawal community in the 14th century, during Tughlaq period. The Baoli is 60m long and 15 m wide rectangular step well. It has 103 steps made of red stones. Earlier, people used to build temple steps to reserve water in ancient India. Since the water had dried up and Baoli is just a dry reservoir now. It is one of the most haunted places of India. People often call it ‘Baoli of the unseen’. People believe that evil spirits reside here.
Agrasen ki Baoli is said to be filled with Black water once. Rumor has it that it attracted the depressed hearts towards itself and hypnotized them to jump into the water. Every time when it absorbed someone, the water level rose. Some believe that the haunted tales are myth. While others have witnessed it. You can go and experience the mystic atmosphere of the place alone. It is located on Hailey Road in Connaught Place, Delhi. 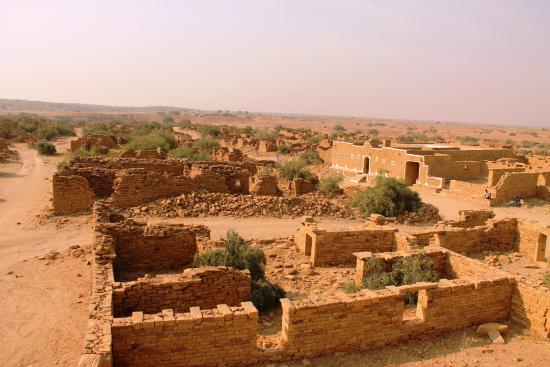 For 5 centuries, the villagers of Kuldhara were said to live in harmony. Then, on one night, they just left… all of them. This strange act has been a source of mystery for a long time. After all around 1500 residents disappeared in the blink of an eye and traces of these people were never found. Various interpretations have emerged; some say that they did so to flee from an oppressive landlord and others mention about a love-struck young couple. The tale states that the father of the girl was an important man in the village and did not approve of the alliance. Whatever the cause was, nobody knows where they went to. It is believed that the villagers cursed the land before leaving. There were some who tried to live here but were said to have met with a brutal death. Today this village remains abandoned, only alive in stories