With local highways and roadways carrying tens of thousands of motorists to work, school and other appointments each day, the sheer amount of volume mixed with human curiosity means even the most minor incident can lead to traffic back-ups for miles. And it only gets worse when the crashes get bigger. Whilst accidents always seem to be on the rise, the travesty in the loss of lives knows no bounds. These leave families distraught and the law, questionable at times. Here’s a glimpse of how these accidents unfolded and shocked Mumbai. 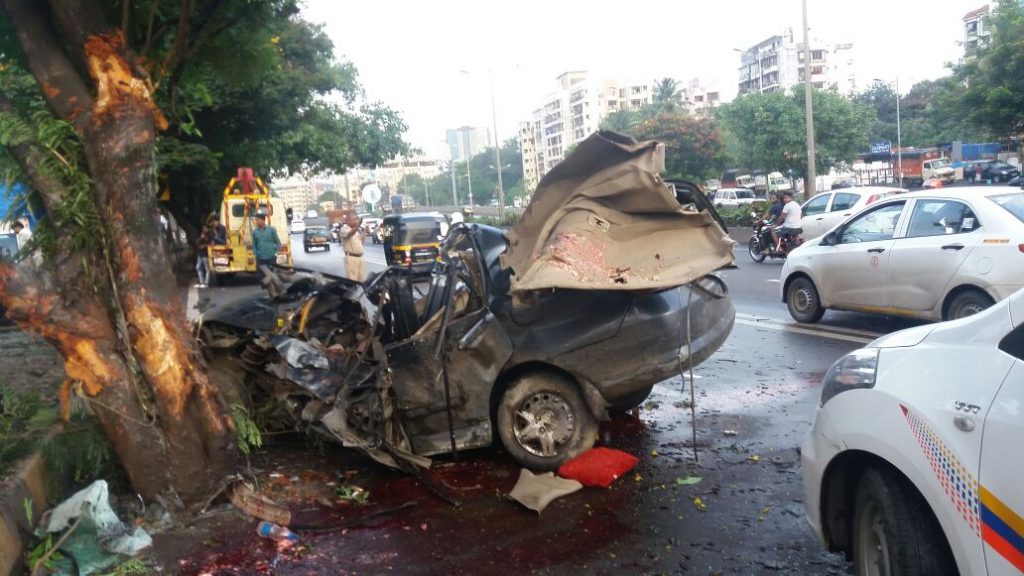 Five youngsters who were out on a nightlong joyride in Vile Parle met with a tragic end after they lost control of the vehicle, slamming into a divider on the right first, then crashing into a barrier on the left, which caused the car to flip high in the air before it went crashing into a tree. The impact completely crushed the car and the passengers inside, killing four of them on the spot, while the fifth succumbed to injuries in hospital. All five deceased were in their early 20s. A Chevrolet car was involved in a horrific accident on the flyover leading to Bandra-Worli sea link.The speeding car, hit a tempo before toppling over the bridge onto the road below. Two people who were on the road died on the spot. 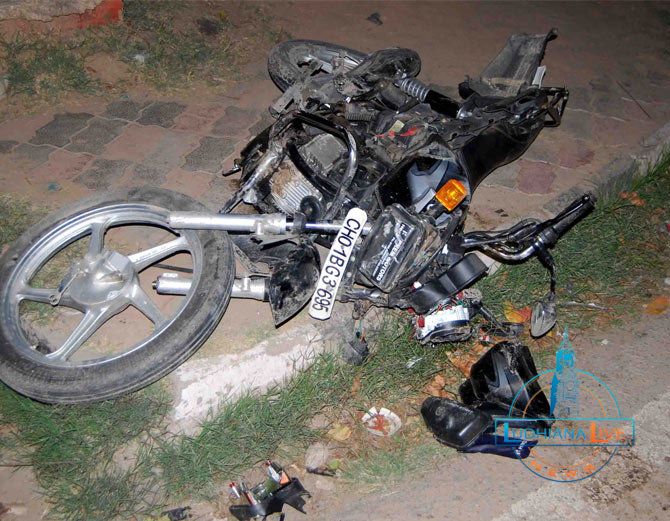 Two young boys from Dharavi died after their bike skid on the Reclamation bridge at Bandra. The two students Laxman Kuchikurve, (19), and Parshuram Thangappa, (18), were speeding on the bridge as they had set out to enjoy a joy ride with a couple of their friends. The two were set to be married the next year.

Three riders of a two-wheeler went under the wheels of truck as they tried to overtake it. While the driver suffered a fracture, his 12-year-old brother who was riding pillion, died on the spot. The Shil-Daighar police registered a case against the truck driver and arrested him. 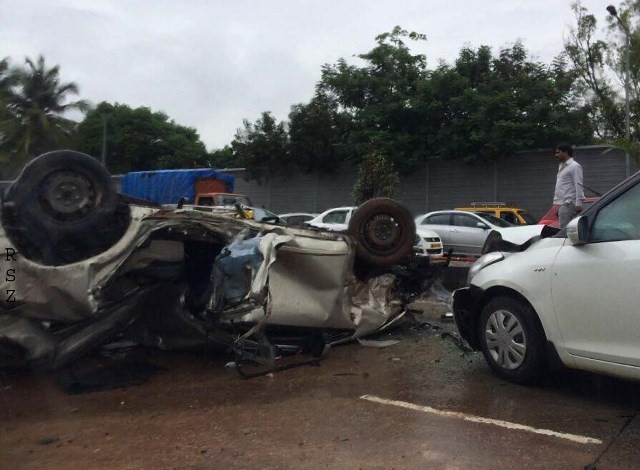 Three persons were killed and two others were injured in a pile-up car crash on a stretch of the Eastern Freeway near Chembur. The vehicles were so mangled that gas cutters had to be used to extricate the victims. The accident happened when a speeding Toyota Innova lost control, vaulted over the road divider and crashed into an oncoming Hyundai Santro taxi. A Swift Dzire that was right behind the taxi, too, crashed into it. The people died and two suffered injuries. Two amateur drivers lost control of their milk van as they drove recklessly and crushed around 10 people sleeping outside their hut in Naralwadi, Mazgaon. Of the 10 injured, one child sustained fractures while the other nine escaped with minor injuries. 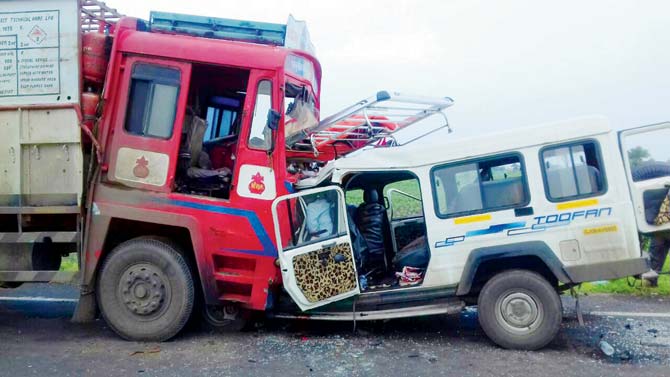 Ten members of a Dombivli family died on their way to a Bhavnagar temple when their jeep collided with a truck coming from the opposite direction. The police suspect that the driver, who also died, fell asleep at the wheel.

Two people were killed and 15 others were injured after brakes of a Karnataka private bus failed near the Adoshi tunnel at the Mumbai-Pune Expressway. Primary investigations revealed that after the brakes failed, the driver lost control of the bus which then rammed at the road divider and landed on the bridge. 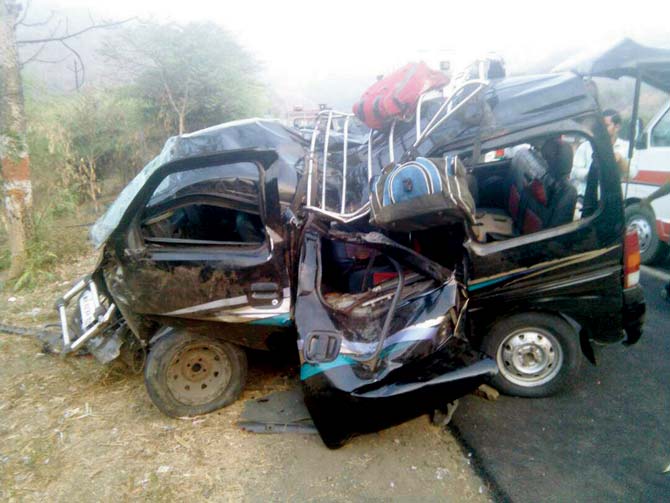 The driver of a 12-seater car fell asleep on the wheel leading to the death of three passengers. The vehicle dashed first into a divider and then into a tree. The accident took place on the Mumbai-Pune Expressway near Panvel.

Two constables, who were headed home after duty, were hit by a speeding Mercedes near Cooperage ground in Colaba. While both the cops were badly injured, the occupants of the Mercedes abandoned the car and fled. Both the cops had to be taken to the Intensive Care Unit. 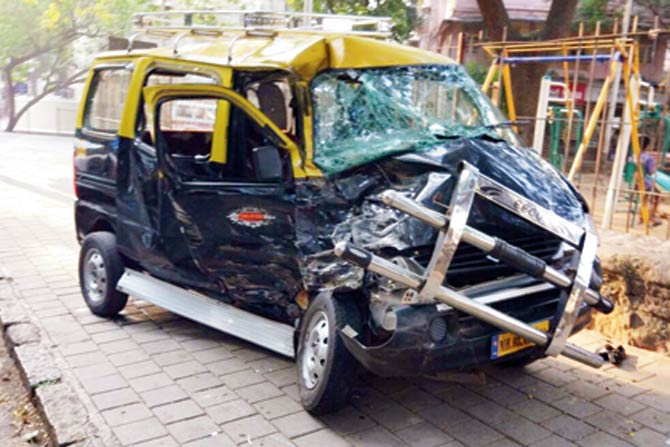 A tempo heading towards Dadar rammed into a taxi on Parel TT bridge. The passengers of the taxi, which included a seven-month-old girl, suffered serious injuries in the accident. 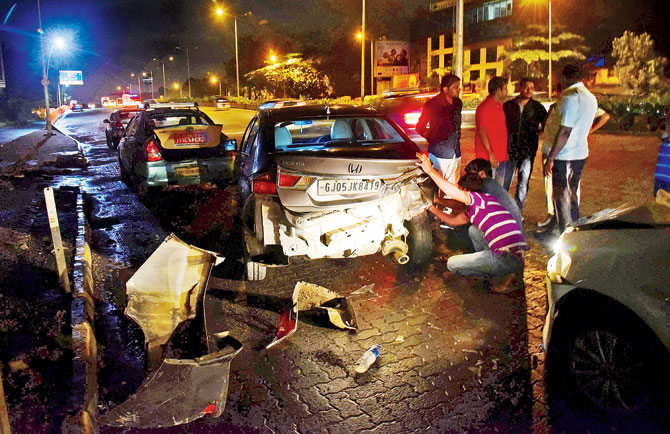 A man who drove to the city from Gujarat to pick up a relative arriving from abroad ended up in a car crash near Vile Parle. While his Honda City car was badly damaged, the motorist escaped with minor bruises. A speeding car crashed into his car, causing it to crash into another car parked in front of it. Three cars were badly mangled in the incident. 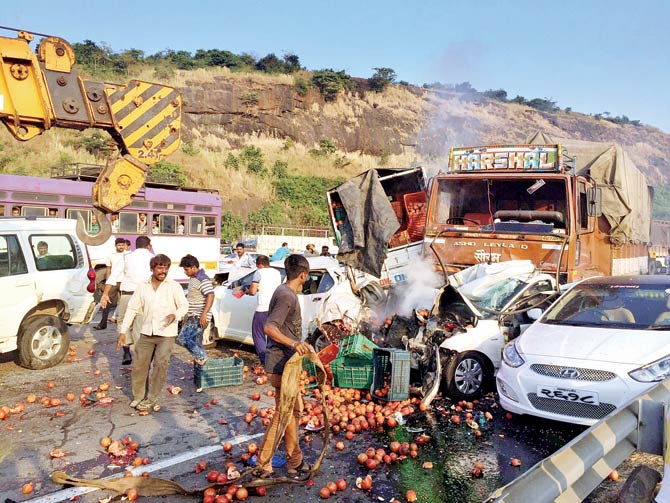 Seven people including four women of a family were killed and two injured, when a speeding SUV rammed into a dumper truck on Pune-Mumbai Expressway near Rasaini in Khalapur. The driver of the SUV lost control after a tyre burst and the car crashed into the divider first and then rammed into a dumper coming from the opposite side. 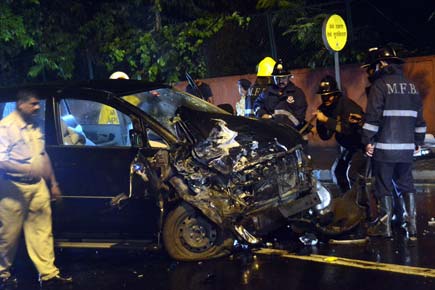 An SUV, that was part of Maharastra Chief Minister Devendra Fadnavis’ convoy, and an Innova car crashed in a major accident in Walkeshwar, close to Raj Bhavan. The SUV was speeding when it collided with the Innova. While both cars suffered damages, the riders managed to get away with minor injuries. 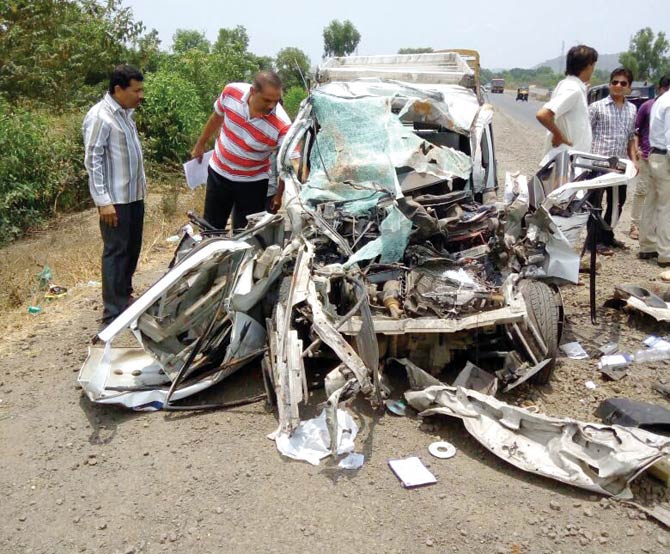 A family of six, including an eight-year-old, and the driver lost their lives after the car they were travelling in collided head-on with a Shivneri AC bus near Indapur village in Pune. 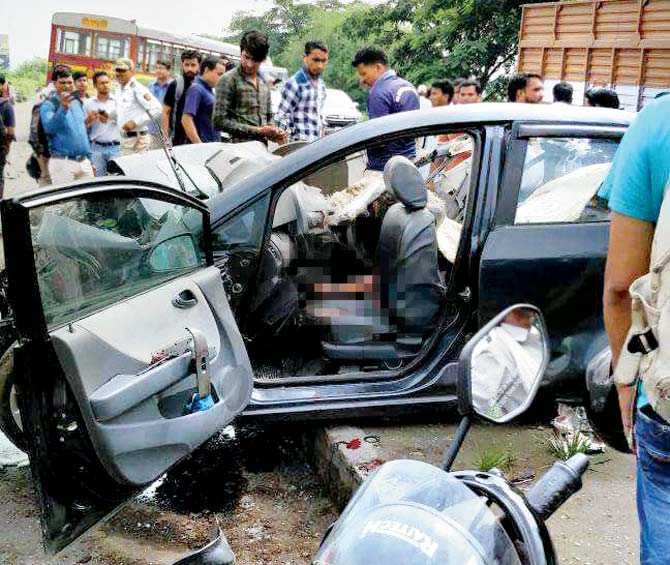 A punctured tyre led to the death of four, three of whom were women, near Vadpe Bhiwandi Bypass as the car turned turtle and flipped on to the other side of the road, before being hit by a truck. The driver was booked for negligence.

A BEST bus crashed into a bike near Shivajinagar, Govandi and killed the bike’s two riders instantaneously. Both the deceased were high school students who had gone out for a ride. It was alleged that the driver of the BEST bus was speeding and cops booked a case under IPC 304 A (Causing death by negligence) and IPC 279 (Rash driving or riding on a public way) against him. 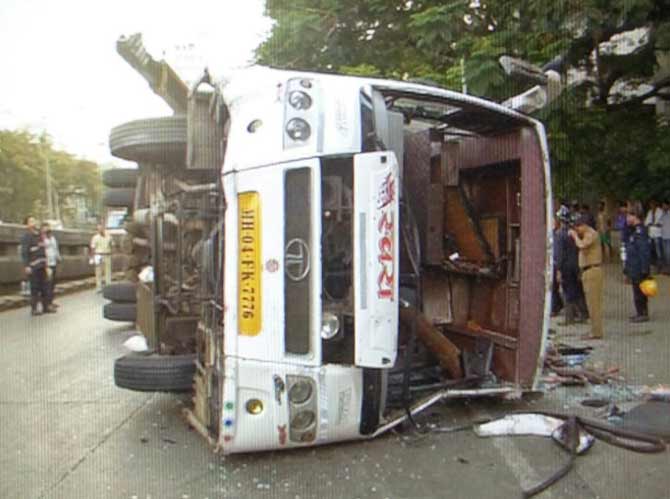 One person was killed and 34 other passengers were injured when a tourist bus overturned in Mumbai’s Dadar area. The bus, which was on its way to Borivali had 35 passengers on board and was coming from Devrukh town in Maharashtra’s Ratnagiri district when its driver lost control of the vehicle. The bus hit a road-divider on Dadar TT bridge and then toppled. 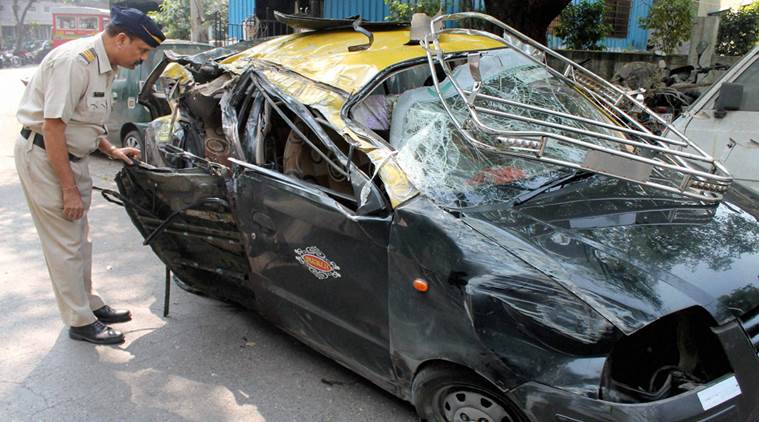 A college student jumped the divider at a curvy section of the JJ Flyover and rammed her car into a taxi travelling in the opposite direction. The driver of the taxi was killed the passenger, an army man, was severely injured. The 20-year-old claimed that she lost control of her car after a speeding vehicle passed by and startled her. 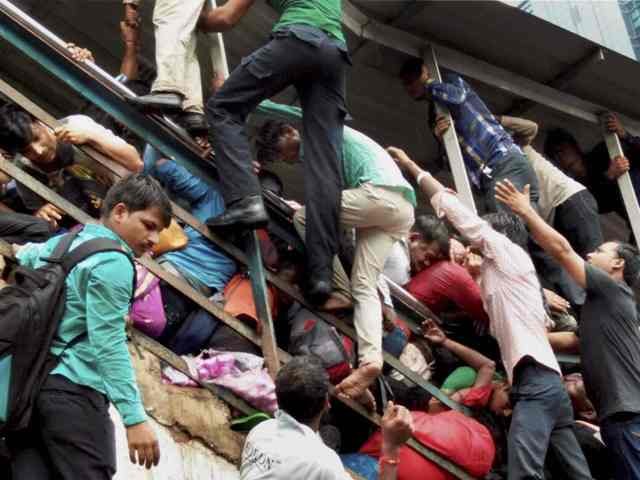 At least 22 people were killed and over 30 seriously injured in a stampede that broke out at a narrow foot overbridge near a local train station in Mumbai after heavy rains. The incident took place around 10.30 am during rush hour near a ticket window between Parel and Elphinstone stations. Many events coincided to produce a tragedy that many say could have been avoided, had successive governments heeded warnings. Four trains had arrived around the same time, and a huge crowd tried to get out. The bridge was already crowded after sudden, heavy rain that had people scurrying for cover. Some say a loud bang after a short circuit led to panic. Within moments, many were crushed and injured.