Indian Idol 12’s host and singer Aditya Narayan is all set to walk down the aisle and marry actor Shweta Agarwal on December 1st in a close-knit ceremony in a temple with just 50 members owing to the COVID-19 pandemic as Maharashtra does not allow more than 50 guests to gather at a wedding. The duo’s wedding reception will take place on December 2. The singer’s wedding celebrations began on Friday with tilak ceremony.

The ceremony took place in the presence of their close family and friends. Many photos and videos from their ceremony were doing rounds on social media. In a video, the Tattad Tattad singer was seen wearing a maroon Kurta and pyjama while Shweta looked absolutely breathtaking as she donned a yellow-golden lehenga. The duo was seen sitting on the stage with Aditya’s parents Udit and Deepa Narayan.

Check out the photos & video: 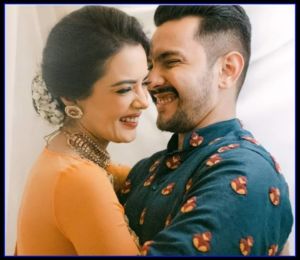 Aditya announced on in October this year that he is all set to marry his long time girlfriend Shweta. The two first met on the sets of their film, Shaapit in 2010 and have been together ever since.

Talking to the Times Of India, Aditya spoke about their marriage and said, “I met Shweta on the sets of ‘Shaapit’ and we hit it off instantly. Slowly and gradually, I realised I was head-over-heels in love and started pursuing her. Initially, she wanted to be ‘just friends’, because we were both very young and needed to focus on our careers. Like every relationship, we have seen a lot of ups-and-downs over the last 10 years. Marriage is just a formality between us now, which hopefully should also happen by November or December.”

ALSO READ: Aditya Narayan And Shweta Agarwal Are All Smiles At Their Roka Ceremony; See Pic