Aishwarya Rai has set the internet on buzz mode with her latest pictures, as netizens started speculating about her second-time pregnancy. She recently met Sarath Kumar's family in Pondicherry and her pictures go viral Off late Aishwarya Rai Bachchan has been in the headlines for her upcoming film, Ponniyin Selvan, Mani Ratnam’s directorial. The actress has yet again set the internet on buzz mode, not because of this film, but because of the speculations on her second-time pregnancy. Her latest pictures make many believe that she is pregnant again. Rai alongside hubby, Abhishek and daughter Aaradhya met Sarath Kumar’s daughter Varalaxmi in Pondicherry.

Aishwarya was in Pondicherry apparently for the shoots of her upcoming film. Abhishek and Aaradhya accompanied her on the sets. The Bachchan family struck a pose with Sarath Kumar, his daughters Varalaxmi and Pooja, who also visited the film sets. Varalaxmi posted the pictures on her official Instagram handle and that’s how it started going viral. She captioned the post, “Met 3 of the warmest and most humble people last night… none other than the gorgeous Aishwarya Rai Bachchan, the handsome hunk Abhishek Bachchan and their sweetest daughter #aaradhyabachchan. Despite the families and lineage that they hail from, their humility and warmth was so amazing, I was just overwhelmed with their love.”

In the pictures, Aishwarya Rai looks pretty dressed up casually in a black off-shouldered top, which she paired with matching leggings.

Check out how a few people reacted to the pictures on Instagram: 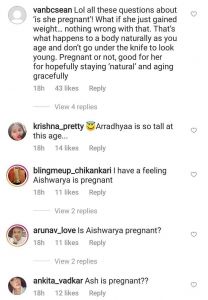 The actress has not yet officially reacted to these speculations.