On February 11, 2021, Anita Hassanandani and Rohit Reddy embraced parenthood for the first time as they welcome a baby boy. As soon as the news about the duo’s baby was revealed, wishes began pouring in on social media from close friends and family. Now, the couple has finalized a sweet name for their newborn son, but it was not revealed by Anita and Rohit, but comedian Bharati Singh accidentally revealed it.

The comedienne shared a video on her Instagram handle, in which she is seen flaunting the gift hamper by the couple. It is written ‘Now accepting friend requests… Aaravv Reddy’. However, this news has not been yet confirmed by new parents Anita and Rohit officially.

Apart from Bharati, Divya Agarwal, Varun Sood, Surbhi Jyoti, Riddhi Dogra, Karanvir Bohra, Karishma Tanna, and many others from the TV celebrities took to Instagram to share the hamper with their fans. 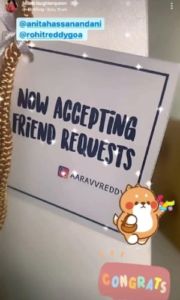 The couple has been sharing many photos of their newborn. However, the couple is yet to see the newborn’s face as they have decided to keep it hidden for a little time.