Aparshakti Khurana and his wife Aakriti Ahuja recently treated their fans with good news of expecting their first child soon. The couple hosts a baby shower ceremony, wherein they appeared having a gala time alongside their family members. The inside pictures from the celebrations are sure to make their fans smile. Ayushmann Khurrana and his wife Tahira Kashyap turn photographers for the parents-to-be.

In the adorable social media pictures, Aakriti is seen carrying a beautiful baby pink dress. She styled her look with a floral crown and simple makeup. Aparshakti on the other side complimented his lady love in a black outfit. White balloons, a delicious cake and their family members appear to have made the celebrations just perfect. Ayushmann Khurrana and Tahira took to their Instagram stories to shared a few adorable pictures.

Check out the inside pics from the baby shower ceremony: 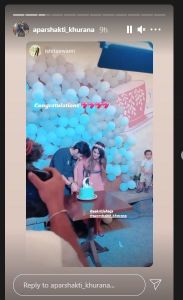 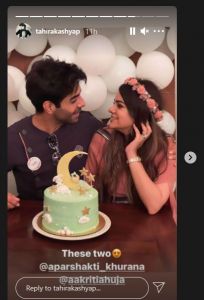 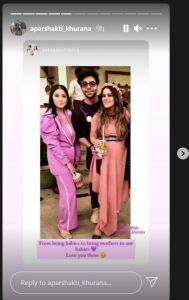 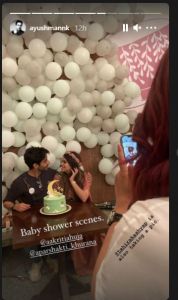 For the unversed, Aparshakti and Aakriti got married to each other in September 2014, ever since then they have been shelling out major couple goals for their fans. On June 4, the couple officially announced about expecting their first child. They shared an adorable picture on social media, wherein she was seen flaunting her baby bump.