South Korean girl group, BlackPink is one of the leading group from Kpop industry currently. The four girls-Lisa, Rose, Jennie and Jisoo are known for paving the way for many Kpop girl groups and they are known for having massive global fan following. On Sunday (August 8), BlackPink member rang in the celebrations of their fifth debut anniversary. The girls took to their Instagram handle and shared adorable pictures with Blinks.

All the four members took to their Instagram stories to share same picture on their special day today. Jisoo wrote on her Instagram story, “Congratulations on the 5th-anniversary BLACKPINK and our Blinks <3” 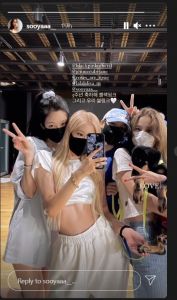 Lisa captioned her story post, “I love you my Jen, Chaen, Choo for staying in my life together for 10 years, and congratulations to BLACKPINK for the 5th debut anniversary. Love you.” 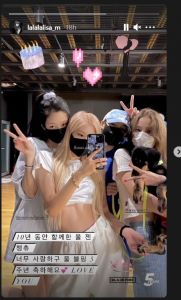 Rose simply shared their picture and used emojis to express her feelings: 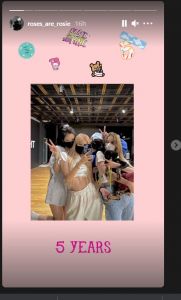 Last but not the least, Jennie captioned her story post, “I wuv you girls and my blinks”. She also shared a pic with Lisa, her bestie.

For the unversed, BlackPink members have recently released their debut movie, titled BlackPink: The Movie. According to the Korean Film Council (KOFIC), BlackPink’s first movie sold 8,680 tickets and grossed $98,460 in four days from Aug 4 to 7 in South Korea. It had garnered 4,553 in total admissions and gross of $51,420 to place seventh among the top-grossing films for the day.

YG Entertainment has reportedly planed something interesting for BlackPink and Blinks on the special occasion of their 5th debut anniversary.