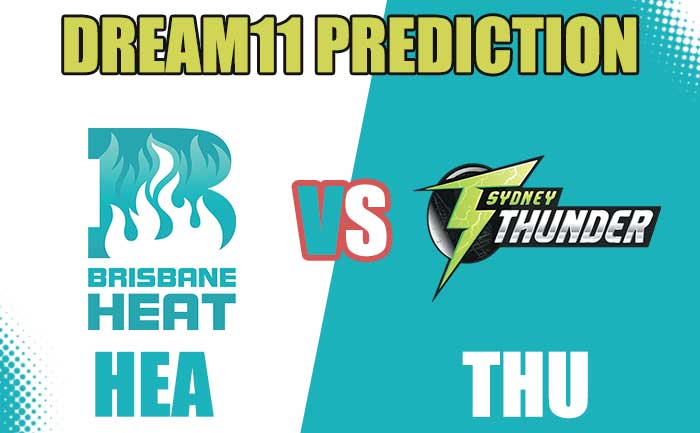 The much awaited Dream 11 Big Bash League 2019-20 is all set to kick off from today (December 17) as former BBL Champions, Brisbane Heat and Sydney Thunder to lock horns at Gabba. There are dozens of things you should know about both the teams and that will attract your attention. According to reports, both Bristbane Heat and Sydney Thunder have made several changes to their roster.

The likes of Chris Lynn, Tom Banton, Max Bryant, Matthew Renshaw, Ben Cutting, Alex Hales, Usman Khawaja, Chris Green among others are expected to hog the maximum spotlight in today’s match. Brisbane Heat seems to be stronger when it comes to both batting and bowling units while Sydney Thunder has made some changes in their roster to give Brisbane Heat a tough competition.

Speaking about the previous season of Big Bash League, Brisbane Heat secured seventh position winning merely four points in 10 matches. Whereas Sydney Thunder performed better than Brisbane Heat but they also won four matches. We have brought you some tips helping you pick your Dream 11 Team for HEA vs THU.

Players to choose from:

Brisbane Heat is all set to bring Tom Banton and Zahir Khan in today’s match. If these two worldclass players are added in the squad, it would be an interesting to see HEA vs THU match. Matt Renshaw and Sam Heazlett are likely to feature in the middle order while Ben Cutting will provide the impetus in the death overs.

The Sydney Thunder seems to be strong as they have added Alex Hales and Alex Ross in the squad. The duo of Callum Ferguson and Usman Khawaja complement them perfectly with Matt Gilkes donning the gloves for the Thunder.

Notably, Chris Morris would not seen in today’s match, so, Daniel Sams and Arjun Nair will have to chip in with the bat as well with T20 specialist, Chris Green also in their ranks.