BTS members- Jin, Jimin, Jungkook, J-Hope, RM, Suga and V appear refreshing in the music video of Permission To Dance. The song is set in the backdrop of post-pandemic life 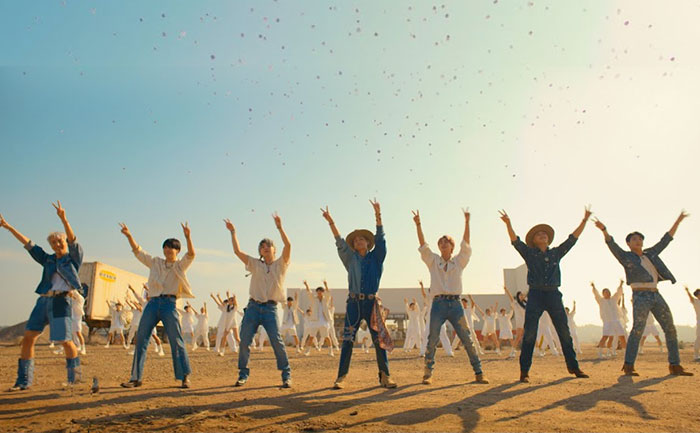 BTS members- Jin, Jimin, Jungkook, RM, Suga, V and J-Hope are known to inspire their fans with their social media posts and music videos. The boyband has unleashed yet another song on Friday i.e July 9. The music video is filled with positivity and a message of love for the ARMY’s. This song has been co-written by Hollywood’s pop star Ed Sheeran and it’s sure to make you groove with happiness.

Dressed up in cowboy attire, BTS members are seen dancing in the backdrop of the track in the deserted location. BTS’s stable purple balloons make an appearance every then and now in the music video, representing their love for the fans. Today marks the celebrations of ARMY Day for the boyband. On the special occasion of naming their fandom on this day, BTS released the new music video.

Check out the official music video for Permission To Dance:

For the unversed, BTS members will appear on Jimmy Fallon’s The Tonight Show on June 13 and 14 respectively. On both days, the septet will perform their songs. The performances will be on Permission To Dance and Butter. BTS had last appeared in Fallon’s show during the release of Dynamite, wherein the makers had hosted a BTS special week last year in September.

Also Read: BTS To Appear On The Tonight Show By Jimmy Fallon For Two Days