Deepika Padukone deletes all social media posts ahead of new year, leaving fans in a shock Some fans have also started speculating that her social media accounts might have hacked. The reason being that in the past couple of days, many celebrities social media handles got hacked. Among them are Sushmita Sen’s daughter Renee, Vikrant Massey, and Farah Khan Kunder.

Deepika is an avid social media user. She has over 52 million followers on Instagram and over 27 million on Twitter. But now her Twitter and Instagram handles do not show any of her tweets, pictures or videos that were shared earlier. 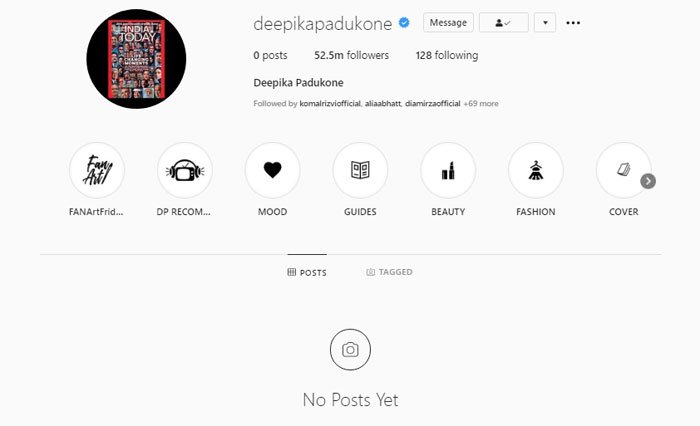 Deepika is currently in Ranthambore with her husband Ranveer Singh to ring in the New Year in the exotic locales there. The couple even met Ranbir Kapoor, Alia Bhatt, Neetu Kapoor, Riddhima Kapoor Sahni, and others there.

On the work front, Deepika will next be seen in Shakun Batra’s next project that also features Ananya Panday and Siddhant Chaturvedi. She will also be seen with husband Ranveer Singh in Kabir Khan’s 83. Deepika is also rumoured to be a part of Shah Rukh Khan’s next Pathan, to be produced by Yash Raj Films.

Fans are waiting for some statement from Deepika Padukone. They are quite anxious to know the reason behind her actions.