Star couple, Virat Kohli and Anushka Sharma never fail to shell out major family goals for their fans. Ever since they welcomed their daughter, Vamika, they have been ruling the social media trends. AB De Villiers’s wife Danielle De Villiers recently posted an adorable picture on Instagram, sparking the discussion about Vamika’s ‘first friend’. Many fans now think that Vamika’s first-ever friend is Danielle’s daughter, Yente.

Recently, Danielle De Villiers took to her Instagram handle and shared an adorable picture. It sees back of the two infants, dressed up in matching clothes lie down. One of them is her daughter Yente and the child’s name she didn’t reveal in the post. She captioned her picture as, “baby hugs and cuddles for her very first friend”. Many Virushka fans took notice of this picture and started commenting that it’s none other than Vamika and Yente is Vamika’s ‘first friend’. How do you think the fans started making these speculations? Well, it’s the band that they have earlier seen in Virat Kohli’s picture, wherein Vamika’s wrist band was visible. The infant in Danielle’s picture is also wearing the same band.

Check out both pictures here:

Now check out the comments of few fans on  Danielle’s post: 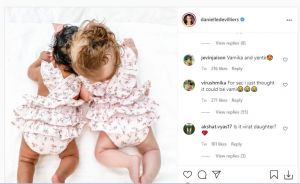 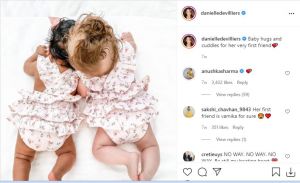 For the unversed, Virat Kohli and Anushka Sharma have not revealed the face of their daughter as yet. The couple keeps posting pictures with their little munchkin, however, they are yet to reveal the baby’s face.