He soon took to his Instagram handle and shared rave reviews of his experience. Penn heaped praise on the ‘Quantico’ star along with the outlet’s head chef Maneesh Goyal. He wrote, “Finally made it to @SonaNewYork so delicious.” 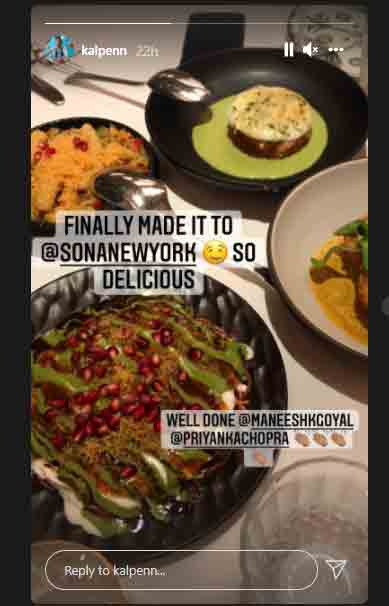 In the Instagram story, Kal shared a picture of four dishes and lauded Priyanka and Sona’s co-owner, Maneesh K Goya

Priyanka launched the Indian restaurant Sona along with restaurateur Maneesh Goyal in New York City on March 26. The restaurant has a private dining room, named after Priyanka’s nickname ‘Mimi’ ’ and also sells art by Indian artists.

Recently, Priyanka’s husband and singer Nick Jonas too shared a photo from the restaurant as he enjoyed a hearty meal.

On the work front, Priyanka Chopra will be seen in ‘The Matrix Resurrections’, starring Keanu Reeves. She also has ‘Text For You’ with Celine Dion and Sam Heughan. Next is Russo Brothers’ ‘Citadel’. Priyanka Chopra is all set for her Bollywood comeback. She will be seen in ‘Jee Le Zaraa’, with Alia Bhatt and Katrina Kaif. The film will be directed by Farhan Akhtar.