Kangana Ranaut is currently hitting the headlines as on Tuesday, Twitter suspended the Bollywood actress’s official handle after her tweets against West Bengal assembly election results. In her series of tweets, Kangana had demanded president rule in West Bengal after Mamta Banerjee-led TMC won the recent election in the state, defeating BJP.

In her tweet, she seemed to urge Prime Minister Narendra Modi to “tame” Mamata Banerjee using his “Virat Roop” from “early 2000s” in Bengal. “We need super gundai to kill gundai… she is like an unleashed monster, to tame her Modi Ji please show your Virat roop from the early 2000s,” she tweeted.

Check out the screenshot: 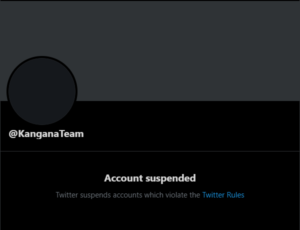 Kangana Ranaut also spoke about the Bengal violence, post-election. She also accused the Bengal administration of propagating violence in the state.

She also shared a tweet which read as “Gangraped BJP worker by TMC goons, Indira Gandhi imposed emergency 39 times, and she told international media India does not care what you think to get lost, this gawar bloodthirsty dehati nation does not know the language of love Modi Ji, they need danda.”

Twitter Spokesperson told WION about Kangana’s account suspension and stated: “We’ve been clear that we will take strong enforcement action on behaviour that has the potential to lead to offline harm. The referenced account has been permanently suspended for repeated violations of Twitter Rules specifically our Hateful Conduct policy and Abusive Behaviour policy. We enforce the Twitter Rules judiciously and impartially for everyone on our service.”

Since last year, Kangana Ranaut has been tweeting controversial posts on her Twitter ever since she took over her account.

The ‘Queen’ actress is yet to respond to her Twitter account being suspended. Till then, stay tuned to The Live Mirror for more updates.