The ‘Queen’ actress, Kangana Ranaut has been constantly making headlines after she reveals the dark sides of Bollywood industry. Post Sushant Singh Rajput’s demise she has been constantly blaming few elite celebs of side-lining the outsiders and forming nepotism clubs in the industry. ‘Yeh Hai Mohabbatein’ fame, Karan Patel takes an indirect dig at the actress for her recent statements. He posts about her ‘mental health’.

The actor took to his Instagram stories and posted a cryptic note slamming Kangana. He posted about the characters that Ranaut portrayed in ‘Tanu Weds Manu’ series and stated that he wonders why the hero kept running away from his wife in that films. “Main humesha sochta tha ki Tanu Weds Manu 1 and 2, dono filmon mein jo hero hai woh apni biwi se door kyu bhaag jaana chahta hai? Iska matlab aaj samajh aaya, bhai aap uss biwi ke maansik santulan ka pradarshan aaj kal news mei dekh rahe ho na. (I always wondered why the hero always ran away from his wife in Tanu Weds Manu 1 and 2, I have finally realised the reason. After all, we can see the mental balance of the wife being displayed on TV news these days),” read his story post.

In another post he further wrote, “Hadd ho gayi bhai, arre jo aadmi kuch saal pehle dekhi hui film ka matlab khud aaj samjha ho, uss aadmi ki kyaa majaal ki wo kisi aur ka mazaak udaye. Aaj toh agar koi generally bhi kisi film ki baat kare toh ye media wale usse kisika mazaak udana samajhte hain. Mera yaQueen karo, i mean no offence to anyone. (The kind of person who took years to understand a film’s meaning, how can that kind of person have the audacity to poke fun at anyone? Even if someone talks about something generally, media considers it to be a mocking comment on someone. I meant no offence to anyone, believe me).” 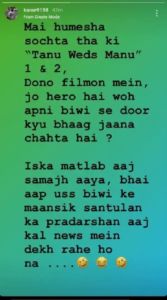 Oct 28, 2020
This is not for the first time the actor has expressed his opinion against Kangana Ranaut. Earlier, the actor had targeted her stating that the actress has no right to speak about nepotism, when her managing team from her family.