KGF Chapter 2: Yash and Raveena Tandon’s THIS Video Will Make Your Day

In the latest video, KGF 2 star Yash can be seen standing with a lady who issued a death warrant against him in KGF Chapter 1. 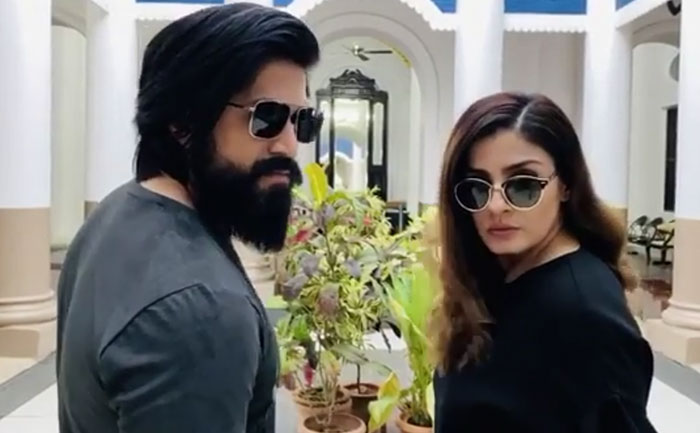 A few days after multiple videos and photos were leaked from the sets of KGF Chapter 2, yet another video of Yash surfaced on social media. In the latest video, Yash aka Rocky Bhai can be seen standing on the verandah of a house and they turn behind giving a daring look. Fans of Yash can’t seem to get enough of his latest video.

The latest video of KGF star Yash is shared by Raveena Tandon. Sharing the video on social media, Raveena wrote, “When looks can kill.. the “death warrant” has been signed on Rocky..#kgfchapter2”

The video comes a few days after director Prashanth Neel, who is directing the second instalment of KGF, announced that Bollywood actress Raveena Tandon is making her comeback in movies with Yash starrer KGF Chapter 2.

According to reports, Raveena Tandon will play the role of Ramika Sen while another Bollywood star Sanjay Dutt will be seen playing the role of Adheera, the antagonist in the movie.

Ramika Sen may not be welcome to Rocky's territory.. but Raveena Ma'am is definitely more than welcome to Yash's hometown!! 😃 It's a pleasure having you onboard ma'am !! Let's have a blast 👍

Taking to Instagram, Yash shared a photo of him with Raveena and wrote, “Ramika Sen may not be welcome to Rocky’s territory.. but Raveena Ma’am is definitely more than welcome to Yash’s hometown!! 😃It’s a pleasure having you onboard ma’am !! Let’s have a blast 👍”