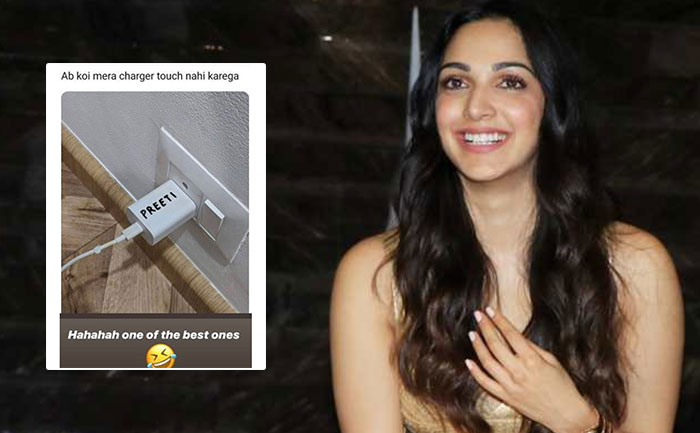 Kiara Advani essayed the role of Preeti in the blockbuster hit movie Kabir Singh. The movie had hit the theaters during the summer. It has been long time when the film was released and though the film may have left the box office, the memes are still being active.

Apparently, a netizen had posted a meme related to the movie Kabir Singh. The post showed the picture of a white charger with preeti written over it and mentioned clearly that no one will touch it. The charger was plugged to the wall. Along with the picture was a caption shared that read, “Ab koi mera charger touch nahi karega.” Check out the pic below.

In the hit film Kabir Singh, there was a particular scene where Kabir can be seen mouthing obscenities and riding angrily all the way on his bike to beat up the person into a pulp as soon as he hears that someone had touched Preeti. Kiara Advani shared the meme on her Instagram stories and called it as, “Hahahah one of the best ones.”  Have a look at the picture below. In spite of several criticisms Kabir Singh soared in the box office earning about Rs 250 crores. On the professional front, Kiara Advani will be seen in Good Newwz. The film will feature A list actors such as Akshay Kumar, Diljit Dosanjh, Kareena Kapoor Khan besides her. Apart from that, she will also be seen with Akshay Kumar in Laxmmi Bomb and Bhool Bhulaiyaa 2 opposite Kartik Aaryan.