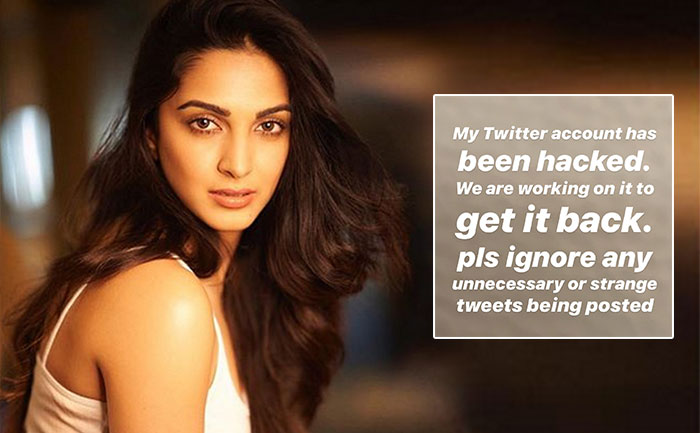 Lately, the actress uploaded few photos on her Instagram stories sharing with her fans of her twitter account being hacked. The actress account is in the recovery process. Kiara also informed her followers to refrain from clicking any link as it could be suspicious.

“My Twitter account has been hacked. We are working on it to get it back. Please ignore any unnecessary or strange tweets being posted.” Kiara said. Informing her followers she also further mentioned not to click on any suspicious link that will be sent from her twitter account and that currently her account is hacked and the link is not sent from her side. Besides Kiara, Shahid Kapoor and Amitabh Bachchan have also been victim to the social media hacking. On professional front, the actress was last seen in Kabir Singh. The movie became a blockbuster hit and earned about Rs 280 crore. The film was a rage and a big trend among the youth. People loved the on-screen chemistry between her and Shahid in the film. Now, Kiara has many films in her kitty such as Indoo Ki Jawaani, Bhool Bhulaiyaa 2, Laxmmi Bomb and also Netflix film Guilty.