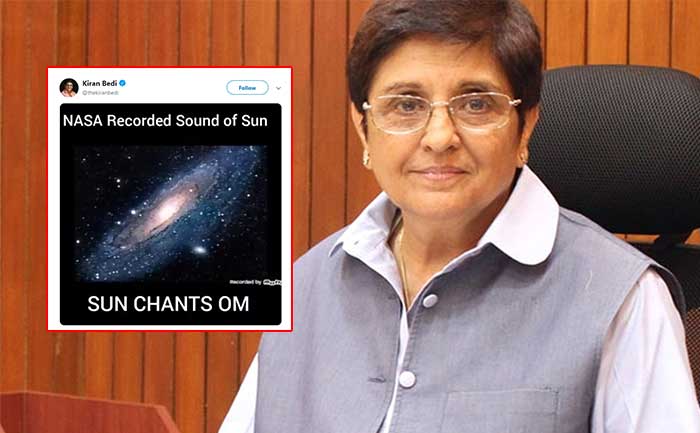 The latest personality who has fallen prey to online trolls in none other than current Lieutenant Governor of Puducherry, Kiran Bedi. The reason behind getting brutally trolled on social media is Kiran Bedi posted a doctored video on Twitter which has a caption written over it ‘NASA Recorded Video of Sun Chanting Om’.

NASA has, however, dropped multiple actual videos of what Sun sounds like, which you can watch on YouTube. The video we have posted below has solar sounds generated from 40 days of the Solar and Heliospheric Observatory’s (SOHO) Michelson Doppler Imager (MDI) data and processed by A. Kosovichev.

The moment the retired Indian Police Service Office, Kiran Bedi, posted the doctored video people did not take much time to troll her badly. A user wrote on Twitter, this happens when you are a fan of Hrithik Roshan’s movie Koi Mil Gaya and a Lieutenant governor.

When you are a former IPS officer, a Lieutenant governor but also a big fan of Koi Mil gaya https://t.co/TKBLdCnnnR

One more user chimed in: “And the entire solar system chants Hum Dekhenge. NASA has a recording of that too.”

Another added; ‘To all those saying “She used to once be a hero”, remember that it was Kiran Bedi who had denied access to condoms for male prisoners in Tihar jail to curb homosexuality in 1994. She never was, and never will be, my hero.”

There's no more vaccum in space.. every fuckin place in universe would be filled by sangi's stupidy. https://t.co/9vBEL6cZFE

And the entire solar system chants Hum Dekhenge. NASA has a recording of that too. https://t.co/CwKPCmPaTL

In the year 2018, a group of scientists from NASA and ESA used data from to map the vibrations the form the ‘low, pulsing hum of the star’s heartbeat’.

Associate director in the Heliophysics Science Division, Alex Young explained: “When anything material moves, waves travel through it, and the same thing happens inside the Sun. The Sun is vibrating at lots of different frequencies.We don’t have straightforward ways to look inside the Sun…so using a star or the Sun’s natural vibrations allows us to see inside of it.”

That’s the only reason why you should verify the content before forwarding to anyone and posting on social media.