Mahesh Babu and Narataa Shirodkar are one of the most loved celebrity couples and with good reason. The two celebrated their 15th wedding anniversary this year in February and are still deeply in love. In fact, Mahesh Babu made quite a few hearts melt when he revealed that he had a crush on his wife Namrata Shirodkar at 26.

The actor did an Instagram “Ask Me A question” session with his fans on Sunday night. A fan asked Mahesh Babu if he has a crush on anyone, to which the actor replied by tagging his wife Namrata Shirodkar. “I did at 26 and then I married her.”

Mahesh Babu met his wife-to-be Namrata Shirodkar on the sets of Vamsi which released in 2000. They got married in 2005 and are parents to son Gautham (13) and daughter Sitara (7). 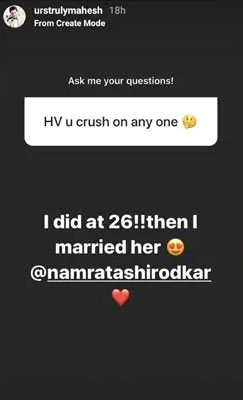 The adorable couple recently celebrated their 15th wedding anniversary and Mahesh  Babu shared an adorable post to mark the day. He wrote: “Happy 15 my love! Love you a little more each day.”

Happy 15 my love!! ❤ Love you a little more each day 🤗 @namratashirodkar 💕

The two often treat fans to moments from their lives. They recently had a blink contest that also made it to social media.

Namrata Shirodkar has featured in films such as Vastaav, Bride And Prejudice, Dil Vil Pyar Vyar, and Tehzeeb during her career span.