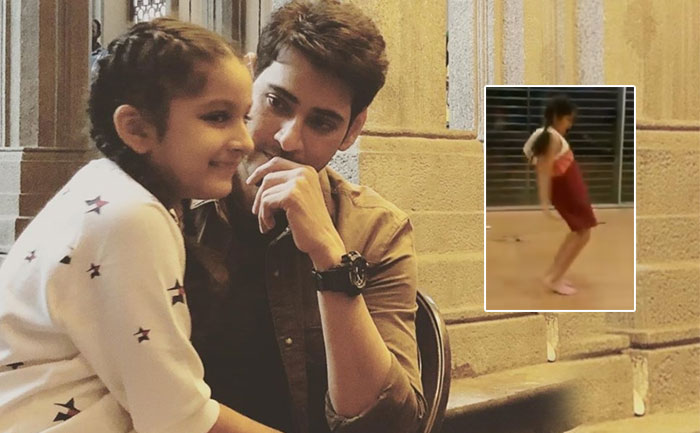 Yet another video of Mahesh Babu’s daughter Sitara Ghattamaneni has gone viral on the internet. Sitara Ghattamaneni is very keen about dancing since her childhood. In the latest Tik Tok video, she can be seen dancing on the tune of ‘He’s Soo Cute’ song from his dad’s upcoming film, Sarileru Neekevvaru.

Notably, this is not the first time, Mahesh Babu’s daughter, Sitara’s TikTok video has been winning hearts on social media. Earlier, Sitara’s video dancing to her father’s popular number ‘To Aaja Saroja’ from his movie Aagadu, went viral on youtube and later she was also caught dancing on the tune of ‘Rama Rama’ from the film ‘Srimanthudu’.

People who have watched Sitara’s latest dance video of “He’s Soo Cute” have been appreciating her talent and calling her yet another star emerging in Mahesh Babu’s family.

Earlier, Mahesh Babu had revealed how his wife Namrata Shirodkar has set rules in place for their kids, Gautham and Sitara. When Telugu superstar was asked about how his kids react to his stardom, he said, “They don’t really react they r aware but are extremely grounded and are being brought up like regular families with kids !! Namrata has a few rules in place so luckily that bit is taken care of.”

Directed by Anil Ravipudi, Sarileru Neekevvaru will hit the theaters on 11th January 2020 on the eve of Sankranthi.