On Monday, Malaika Arora and Arjun Kapoor celebrated Holi together at a luxurious resort in Alibaug. On Monday, lovebirds Malaika Arora and Arjun Kapoor celebrated Holi together at a luxurious villa in Alibaug. The duo has been in a relationship for quite some time and often shell out major couple goals. Their Alibaug trip included lots of food and good company as they were accompanied by Arjun’s cousin Rhea Kapoor, boyfriend Karan Boolani, fashion designer Masaba Gupta, her beau Satyadeep Misra and also Rhea’s close friend Samyukta Nair.

Arjun-Malaika have been glimpses of their stay on their Instagram handles. The ‘Gunday’ actor shared a snap, where Malaika was seen enjoying a walk, while Malaika also shared a video, in which, her beau was seen skipping by the pool as she used the GIF ‘Let’s do this’.

Later, Malaika and Arjun lauded Rhea for making a scrumptious crab and prawn.  The actress shared a picture of the delectable crab dish and wrote, “#rheamade Rhea Kapoor ur bloody awesome chef (sic).” Arjun wrote, “Chef Rhea, you killed with the food.” 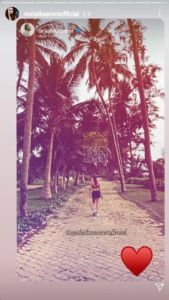 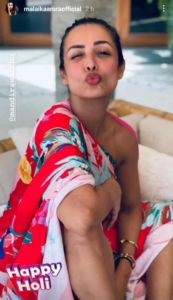 Malaika also shared a couple of photos of herself wishing her fans and followers a happy holi. In the pics, she was seen donning a colorful outfit and wore a neon pink Kinesio tape on her shoulders for her injury.