Mridula Vijay and Yuva Krishna got married as per traditional ceremony

Malayalam TV actors, Mridula Vijay and Yuva Krishna got hitched as per traditional wedding ceremonies. The couple looks adorable as the groom and the bride 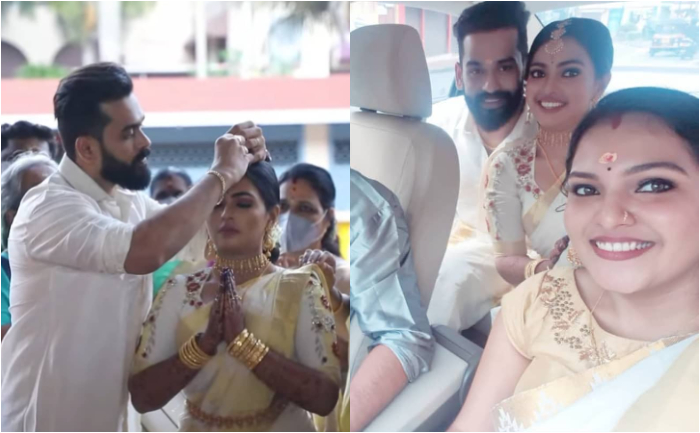 Malayalam TV actors Mridula Vijay and Yuva Krishna finally got hitched to each other. The couple got married in the presence of their close friends and family members. Their wedding took place as per the traditional rituals and they hosted a simple and elegant wedding. Their wedding pictures go viral on the internet.

Mridula Vijay looks gorgeous in a white saree, which has a golden border. She carried a simple look with minimal jewelry and a floral bun hairstyle. Yuva Krishna on the other side opted for a white shirt and a mundu. In the pictures, they appear experiencing a blissful time with their loved ones.

Check out inside pictures from their wedding:

For the unversed, Mridula Vijay is popularly known for doing the show- Manjurukum Kalam. She has been a part of reality shows such as Dancing Stars, Comedy Stars, Ammayimaar Varum Ellaam Sheriyaakum, Star War including others. On the other side, Yuva Krishna is popularly known for appearing as Manu Prathap in the show Manjil Virinja Poovu. Alongside being an actor, he is a successful model, mentalist and illusionist.

It is not revealed as to when the couple met for the first time, however, there are reports that Mridula and Yuva met because of a family friend. And their families decided to take the wedding proposal ahead.