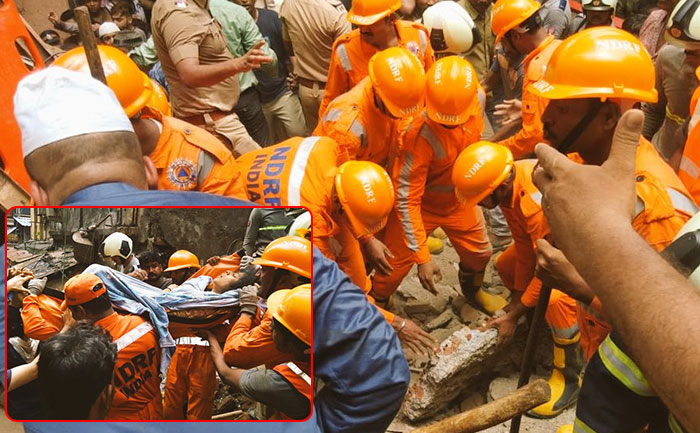 Yet another unfortunate incident happened in India’s financial capital, Mumbai. At least people were killed and more than 40 people feared trapped after a dilapidated building collapsed in Mumbai’s Dongri. The Dongri building collapse incident took place at around 12:00 pm. Three teams of NDRF have been relentlessly working since the building collpased today.

To speed up the rescue operation one more #NDRF team mobolised.

According to reports, owing to narrow lines, Mumbaikers have formed a human chain to rescue people who are trapped under the debris. As of now, five people have been safely rescued. Speaking about Dongri’s building collapse, an eye witness told NDTV, “We heard a loud noise. Everybody shouted, ‘building is falling, the building is falling’. I ran. It felt like a big earthquake.” Adding on another person who saw the incident said, “I saw bodies… There were some seven-eight families in the building.”

Check out the videos and pictures of Dongri building collapse:

Speaking to reports, Chief Minister of Maharashtra Devendra Fadnavis said, “The building was 100 years old. We have given permission to redevelop that area… We will know after investigation if the redevelopment initiative was delayed. Right now we are focusing on rescuing trapped people.”

There have been people who held Brihanmumbai Municipal Corporation (BMC) responsible for the building collapse as they take much time to give permission to repair their old homes. A person who used to live at Dongri told NDTV,  “I applied for permission several times, but the BMC delayed it. All of this (building collapse) wouldn’t have happened if they had allowed us to repair our own building. We don’t want to wait for them. We will use our own funds.”

On July 1, a building collapsed in Mumbai’s Shivaji Nagar in which five people were injured. At the time of the incident, more than 20 people were sleeping inside the building that collpased.