Nayanthara to play Tabu’s character in Telugu Remake of Andhadhun?

Nithiin in talks with Nayanthara to reprise Tabu's role in Andhadhun Telegu remake? 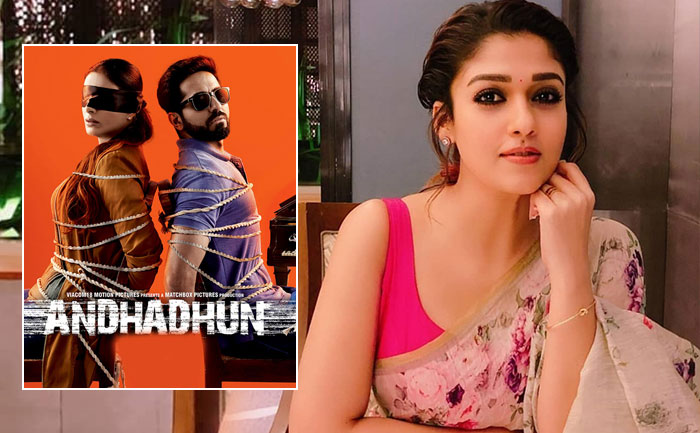 South star Nithiin has bagged the rights of Tabu and Ayushmann Khurrana hit flick Andhadhun. Nithiin’s home banner Shrest Movies has bought Telugu remake rights of Andhadhun for Rs 3.5 crore. The actor is all set to remake the thriller in Telugu. Rumours abound that the actor is in talks with lady superstar Nayanthara. Nithiin hopes to cast the actress in Tabu’s role.

As reported by sources, Baahubali fame Ramya Krishnan has been approached for the same role for the Telugu version. Rumours abounded that Ileana D’Cruz was also approached for the same. But she too denied the offer saying that she is looking for only female lead roles. Tabu too was approached by the makers but she reportedly quoted a huge remuneration.

As per the latest rumours, it seems that the makers have finally zeroed upon an actress who fits the bill. She is none other than Nayanthara. But the hurdle will be her huge remuneration. The ‘Darbar’ actress charges a hefty amount. Apparently she has demanded a whopping amount for the Telugu remake of ‘Andhadhun’.

On the work front, Nithiin is looking forward to the release of his upcoming film, ‘Rang De’. The film stars Keerthy Suresh in the female lead role. Nayanthara was last seen in Rajinikanth starrer Darbar.

Birthday Special: PHOTOS of Genelia Deshmukh with her sons that prove she is the coolest mom

Prabhas To Collaborate With Bhushan Kumar For A Mythological Drama?