On Sophie Turner's 25th birthday, Nick Jonas and Priyanka Chopra have a special wish for the 'Games of Thrones' star. Sophie Turner who played the role of Sansa Stark in the HBO epic fantasy television series, ‘Game of Thrones’ has turned 25 today, i.e February 21, 2021, for which she received a Primetime Emmy Award nomination for the Outstanding Supporting Actress in a Drama Series in 2019. On the actress’s special day, star couple, Priyanka Chopra and Nick Jonas wished her.

Sharing a picture on Instagram Stories, Priyanka wrote: “Happy birthday @sophiet.” In the picture, Sophie looks classy and she is seen wearing a classic white v-neck top and a black skirt.

Nick Jonas also shared an unseen picture which seems from Nickyanka’s wedding and captioned it as, “Happy Birthday @sophiet.” The photo was clicked in a car and featured Sophie, Priyanka, and Joe. They were also seen wearing Indian attire.C 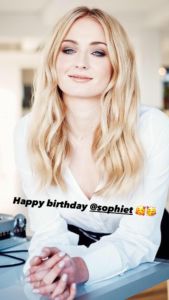 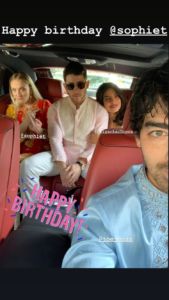 Joe Jonas, Sophie’s husband also dropped a message with pictures of her and wrote: “Happy Birthday babe. You have two moods and I love them both equally love you @sophiet.”

In July 2020, Sophie along with Joe welcomed her first child, a baby girl, Willa Jonas in July last year. However, the couple had kept the pregnancy low-key.

Wishing the actress, a happy birthday!