The 150-member strong group has prepared a catalogue which has the record of the scrap vehicles. Soch Sayani plans to submit the catalogue to BMC and RTO next week and will continue to go ahead with the camapign till next week. So far, 50 scrap cars have been registered.

Thakur Village’s ‘Soch Sayani’ group initiates ‘Operation Khatara’ to get rid of unclaimed scrap cars. Personal vehicles are an integral part of a person living in a city. These vehicles aid to the much necessary easy access for transportation. However, along with increased number of vehicles, the number of scrapped and unclaimed vehicles is also increasing. On the streets, in society or even outside houses, there are many vehicles occupying the space with dust all over it. They are a useless piece of scrap just laying there unclaimed. Even after looking at the gravity of the situation, the people, as well as the administration, overlook the problem. Instead of offering solutions, people choose to ignore it. However, the residents of Thakur Village in Kandivali were resolved to solve the issue for better. So, the residents have launched a campaign,’ Operation Khatara’.The ‘Soch Sayani’ group from Thakur Village has conducted several programs over the years. And last month, this year, they started the ‘Operation Khatara’. The 150-member strong group has prepared a catalogue which has the record of the scrap vehicles. Soch Sayani plans to submit the catalogue to BMC and RTO next week and will continue to go ahead with the camapign till next week. So far, 50 scrap cars have been registered.

The Soch Sayani members created Google forms and appealed to any person seeing scrap cars should fill the form. The catalogue is maintained as per the data provided by the forms. The group plans to send BMC and RTO, a letter along with the catalogue. After which they said it would consider the decision of BMC and RTO to take further steps.In an exclusive conversation with Mumbai Live about the inspiration for ‘Operation Khatara’, Lalit Kumar, a member of Soch Sayani, said “Wherever you go in Mumbai, you’ll find a scrap car. We (Thakur Village) too had many scrap cars in the locality. It was all fine until one day the water supply pipeline of the society burst and it couldn’t be repaired because it was under an unclaimed scrap car. This led us to resolve the problem of scrap cars and thus began Operation Khatara.”

Along with Harsha Udupi; Hema Rao, Lalit Kumar, Ravi Kalra, Shruti Patra and others have been working for the campaign. Hema Rao told that they have seen scrap cars on either side of the roads to Thakur Village. She further explained that monsoon is drawing close and how the unclaimed cars at their places would be a perfect place for mosquitos to breed.Shruti Patra told that RTO is planning to work upon the catalogues sent to them, and will issue a notice with a 15-day deadline to the owners to move the cars and if nobody shows up, the vehicles would be removed from there.

Taking a cue from Thakur Village’s Soch Sayani group, whose relentless efforts resulted in the first lot of six vehicles being towed on Tuesday, Ghatkopar residents from Garodia Nagar have decided to launch their own ‘Operation Khataara’ initiative and have identified 20 such dead vehicles in Garodia Nagar in the past week. Spearheaded by former corporator Pravin Chheda, residents have identified five locations on the 60-feet road which have the highest number of such vehicles.

“We have made posters and banners to spread the word on this campaign. We will click photographs and submit them to municipal commissioner Ajoy Mehta and assistant commissioner, Bhagyashree Khapse. This operation will also help in owners getting back their stolen cars,” said Chheda.

The Leo group in Ghatkopar, comprising 40 people, is actively taking part in this campaign.

“Good spaces aren’t being utilised. The cars are covered with bird droppings, making the whole space unhygienic,” said Manthan Mehta, 38, a resident on MG Road in Ghatkopar East and a member of Leo group.

Kalpesh Shah, another local said a number 9820512120 was printed on posters for residents to complain about the clunkers in Ghatkopar. 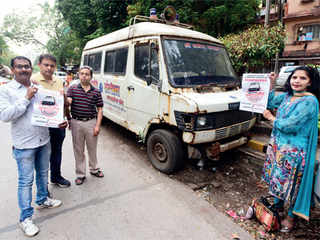 Dr Archana Amolik, who lives near Vidyabhavan school in Ghatkopar, said that there were many abandoned vehicles on 90 feet road near Swami Narayan temple in Nath Pai Nagar and Sudha Park, Shantipath. “These vehicles are used by anti-social elements at night,” said Amolik.

Meanwhile, the impact of Mirror’s Operation Khataara campaign was felt in K-East Ward in Jogeshwari East as four vehicles were towed on Thursday morning from Natwar Nagar Road Nos. 1, 2 and 5.

“We are sending them to the municipal chowky in Jogeshwari as the Andheri MIDC junkyard is filled beyond capacity,” said Prashant Sapkale, assistant commissioner, K-East Ward.

One of the vehicles towed was a Maruti 800 on Natwar Nagar Road Number 2 in Jogeshwari East, which our reader Rajkumar Kanojia had complained about.

After it was towed, Kanojia told Mirror, “A Maruti 800 was left to die on the road for the last four years. I’m glad to see it gone.”