Bollywood filmmaker, Karan Johar faced a huge backlash on social media after he posted the condolences post for late actor, Sushant Singh Rajput. The filmmaker was constantly under the radar over the ‘nepotism debate’ and he got was constantly getting trolled after few celebs targeted him while talking about the ‘movie mafia culture’ recently. For last one month the filmmaker had been keeping away from the social media. However, he finally breaks his social media silence.

On Saturday i,e August 1, Ranveer Singh celebrated football team Arsenal winning the FA cup. The actor took to his Instagram live to add his fans in the celebrations. Amidsts the hundreds of comments flooding in his live session, Karan Johar was one among the commenters. The ‘Koffee With Karan’ host commented with for smileys on the live comment section. 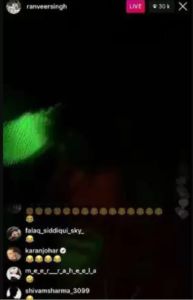 On the work fronts, Karan Johar is all geared up to release his film, ‘Gunjan Saxena: The Kargil Girl’, which features Janhvi Kapoor as first Indian female pilot in combat. The film also stars Pankaj Tripathi and  Angad Bedi in the key roles. The film has been helmed by Sharan Sharma and it is produced under the banner of Dharma Productions.