Prince Harry and Meghan Markle’s explosive interview with Oprah Winfrey has raised many eyebrows ever since it was aired on Sunday, March 7. During the chat, the couple made some shocking revelations about the reason they quit their royal duties, concerns over the color of their son’s skin to Meghan having suicidal thoughts. Now, Buckingham Palace has issued an official statement on behalf of Queen Elizabeth.

The statement read as: “The whole family is saddened to learn the full extent of how challenging the last few years have been for Harry and Meghan. The issues raised, particularly that of race, are concerning. While some recollections may vary, they are taken very seriously and will be addressed by the family privately. Harry, Meghan and Archie will always be much loved family members.” 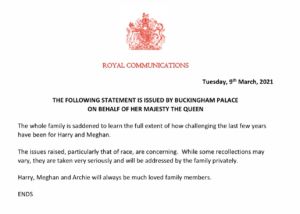 During the interview, the couple did not take the names of those who spoke about their son’s skin color. Later, Oprah told CBS Harry had said it was not Queen Elizabeth or her husband Philip.

The 90 minutes broadcast was the most anticipated royal interview. On Sunday, Oprah Winfrey’s explosive interview with Prince Harry and Meghan reached an estimated 17.1 million viewers in the United States.