Ram Charan and Kriti Sanon bring home the swanky and expensive Mercedes Maybach. Both the stars look ecstatic as they become the proud owners of their new car 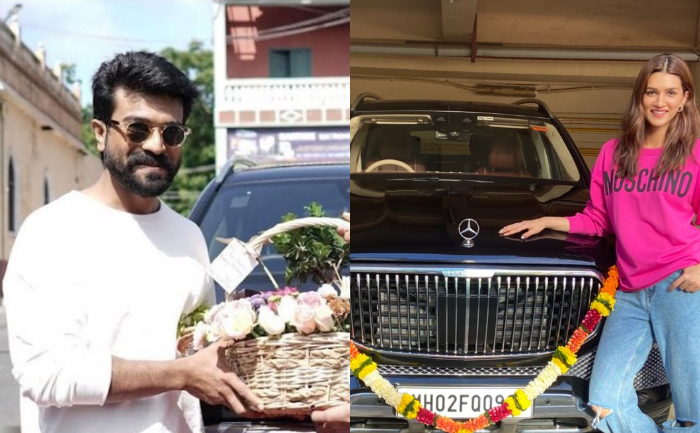 Tollywood star, Ram Charan is known for having a collection of stylish cars in his garage. He recently brought home another luxurious car i.e. Mercedes Benz Maybach GLS 600, which is apparently specially customised for him.  Bollywood actress, Kriti Sanon has also become the proud owner of Mercedes Maybach GLS 600. This luxurious swanky car is worth Rs. 2.43 crores. Both the stars look ecstatic as they add the new car to their collections. Their pictures with their new vehicle goes viral on the internet.

Ram Charan can be seen striking a pose with his newly bought car. Dressed up casually, he went to take his new car. Paparazzi caught him candid while doing the test drive.

Kriti Sanon on the other side also struck a pose with her new car. The actress was recently spotted at the Maddock films office in Santa Cruz (Mumbai), she made a grand entry in her swanky brand new car.

My girl is living her best life. Congratulations Kritsu for getting a new car ❤❤ #KritiSanon pic.twitter.com/MZUdxcPYCe

On the work fronts, Kriti Sanon was last seen in Mimi. She recently wrapped up shooting for Bhediya alongside  Varun Dhawan. Reportedly, she has also wrapped up shootings for Bachchan Pandey with Akshay Kumar. The actress has been busy with the production work of Adipurush, which also features Prabhas and Saif Ali Khan and Sunny Singh in the key roles.

On the other side, Ram Charan recently wrapped up shooting for RRR. This SS Rajamouli directorial also features Jr. NTR, Ajay Devgn, Alia Bhatt, Shriya Saran and others in the key role. The actor will also be seen in Acharya co-starring his father Chiranjeevi, Kajal Aggarwal, and Pooja Hegde. Ram recently started shooting for Shankar’s upcoming project, hailed as RC15. The makers hosted a grand launch event on September 8 for the Mahurat shoot. This one also stars Kriti Sanon.