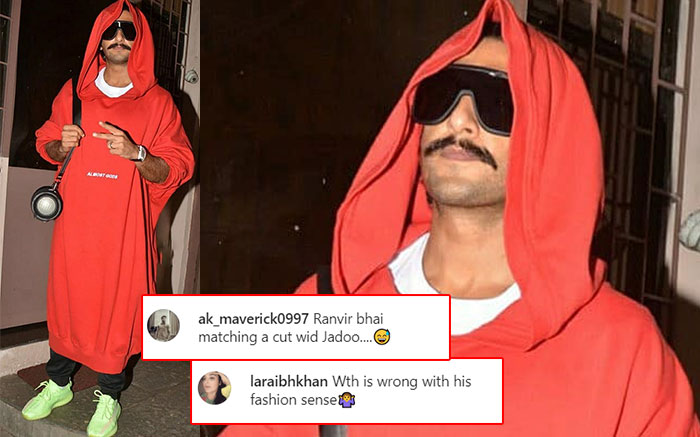 Once again Ranveer Singh did something unimaginable. Recently, he was seen wearing a red, over-sized hoodie. The hoodie was as long from top to toe and the colour was quite bright. Yet again, fans of his couldn’t understand his tastes in fashion. Suddenly, people began roasting his hoodie look and started labeling him as attention seeker.

Although nothing at all bothers Ranveer Singh, not even the trolls. He is unaffected by the comments or trolls and surprises his fans with his fashion sense as he is seen out again. Be it loud prints, jumpsuits, anything. He is gutsy.

Here is the photo and video of his red hoodie look that you can see for yourself and wonder how you found his look.

Here are the comments below that people commented on his look. One called him ‘attention seeker’, another said, ‘Y is ranveer wearing oversized clothes’, and some also typed, ‘joker’. So on the trolling continued.

Currently, Ranveer Singh is working on Kabir Khan’s film. the film is a biopic based on the life of cricketer Kapil Dev. The film name is titled ’83’. The Padmaavat actor will be seen playing the role of Kapil Dev. He will be seen first time ever as a crickter on the screen. A much awaited film.

His next projects after 83 is Takht with Karan Johar. A period drama. The movie will also feature other A-list actors such as Alia Bhatt, Vicky Kaushal, Kareena Kapoor Khan, Janhvi Kapoor, Bhumi Pednekar, Anil Kapoor besides Ranveer Singh.