Ranveer Singh and Dharmendra have kickstarted their shoot schedules for Rocky Aur Rani Ki Prem Kahani. The handsome hunk shares his fanboy moment from the sets as Dharmendra begins shooting

According to a report by Etimes, Dharmendra will not be stepping in the film sets, which was build at the Mehboob Studios. Ranveer was shooting for last few days at Mehboob. Producer, Karan Johar reportedly moved the sets from Mehboob Studios to Powai now. A source close to the film informed the daily that the set in Powai is a beautiful spectacle. A major chunk of the film will be shot at this new sets. Ranveer Singh who happens to cross the vanity van of Dharmendra, shares his fanboy moment.

Ranveer Singh took to his Instagram stories to share a picture of vanity van door, it reads Dharamji. Ranveer captioned the picture, “IYKYK”(abbreviation for “If you know you know”). 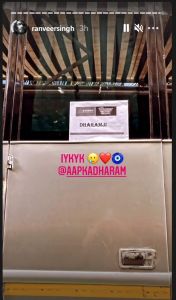 Hum Do Humare Do: Kriti Sanon-Rajkummar Rao’s film to have OTT release?