To go by what Google says, television actress Rubina Dilaik has already been declared as the winner of 'Bigg Boss 14.' ‘Bigg Boss 14’ finale just around the corner and fans of the reality show are quite eager to know who is the ultimate winner and will take home the trophy.  It seems that Google has the answer for all the anticipating fans and it is none other than popular television actress Rubina Dilaik. Yes, you read that right! 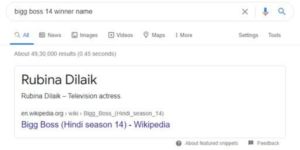 There has been no official announcement by the makers of the show or the channel about the winner. Currently, only 6 contestants are left inside the house- Nikki Tamboli, Rubina Dilaik, Rahul Vaidya, Rakhi Sawant, Aly Goni, and Devoleena Bhattacharjee (Eijaz Khan’s proxy) .

Rubina entered the show with her husband and actor Abhinav Shukla. She has been very vocal about everything and her game inside the house has also been lauded by the netizens. She is known as one of the most strongest contender in the reality show. Having said that, this interesting information, might has well not be true  and we should wait for the grand finale of the show and that’s when we will come to know who is the winner.

Many ex-contestants, celebrities and fans of ‘Bigg Boss 14’ also feel that Rubina will win the trophy. Her fans also keep trending her name every often day.

Well, it is too early to say who will emerge as the winner. Till then, stay tuned to The Live Mirror for more updates.