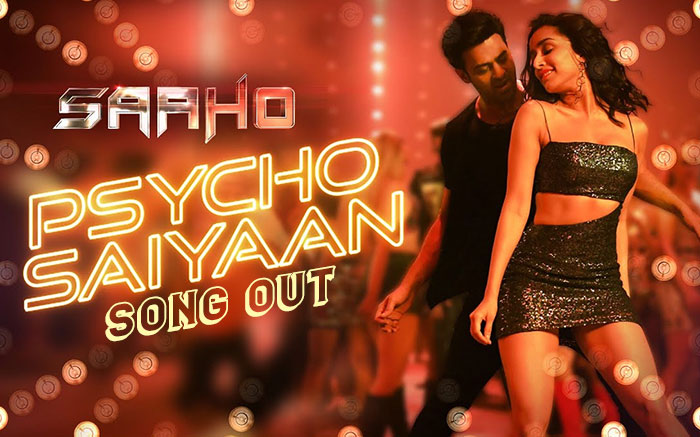 As we have earlier mentioned that this song will make you hit the dance floor, Pyscho Saiyaan is definitely going to make you want to shake a leg. Speaking about their look, Shraddha Kapoor looks gorgeous in a shimmery dress while Prabhas looks dapper in a full black dress.

You can watch Psyco Saiyaan song below:

Dhvani Bhanusali, who has earlier crooned songs like Vaaste, Koka, Leja Re and several others has performed this song. It is written and composed by Tanishk Bagchi. Similar to Psycho Saiyaan teaser, the song has been released in several languages namely Hindi, Tamil, Telugu and Malayalam.

The film has been in the news ever since its teaser was unveiled. It is one of the much-awaited movies of Prabhas after his blockbuster film Baahubali: The Conclusion. The film is directed by Sujeeth, who has previously helmed several movies including Run Raja Run.

Shraddha Kapoor and Prabhas starrer is all set to clash with John Abraham and Mrunal Thakur’s Batla House and Akshay Kumar, Taapsee Pannu, Sonakshi Sinha and Vidya Balan’s Mission Mangal at the box office. The film is scheduled to hit the theatres on this Independence Day.

On the professional front, Shraddha Kapoor will next be seen in Remo D’Souza’s next dance flick Street Dancer 3D featuring Varun Dhawan and Nora Fatehi in lead roles. Apart from this dance film, Shraddha would also be seen in Baaghi 3 opposite Tiger Shroff, which is likely to release on 6th March 2020.

On the film front, Prabhas would next be seen opposite Pooja Hegde and Radha Krishna Kumar’s yet-untitled European period film.