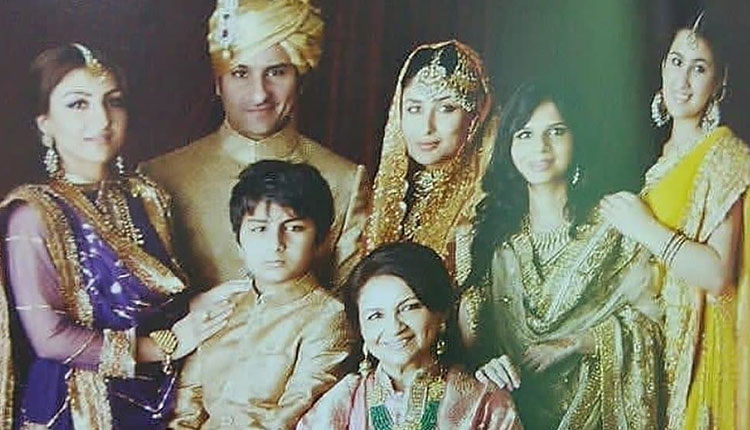 Days after Soha Ali Khan shared a perfect family picture featuring his brother Saif Ali Khan, Kareena Kapoor Khan, Taimur Ali Khan, Ibrahim Khan, Sara Ali Khan and her mother Sharmila Tagore, yet another picture of the royal family has gone viral on the internet. This beautiful picture is from Saif Ali Khan and Kareen Kapoor’s wedding and it will surely make your day.

Like the branches of a tree ❤️ #family #familygoals #missingafew @saraalikhan95

The wedding picture of Said-Kareena made its way on social after seven-long years and photos make their way much to the excitement of the fans. Yes, they tied the knot in 2012. At that time, Sara Ali Khan was 17 and her brother Ibrahim Ali Khan was merely 11-year old, but they both looked classy at their father’s second wedding.

Speaking about father’s wedding, Sara had earlier revealed on Karan Johar’s show that Amrita Singh (Saif Ali Khan’s first wife) dressed her for Saif’s wedding to Kareena. The Kedarnath actress said, “I must tell you, mom dressed me for my father’s wedding.”

On the same show, she added, “I feel that everybody has been very clear with me, vis-a-vis the equations. It has never been confusing. Kareena herself says, ‘Look, you have a great mother. What I want is for us to be able to be friends.’ My father also never said, ‘This is your second mother’ or made it uncomfortable in any way.”

Meanwhile, Sara Ali Khan is currently shooting for Imtiaz Ali’s next, which is touted to be a sequel to Saif’s Love Aaj Kal. The film also has Kartik Aaryan in the lead role.