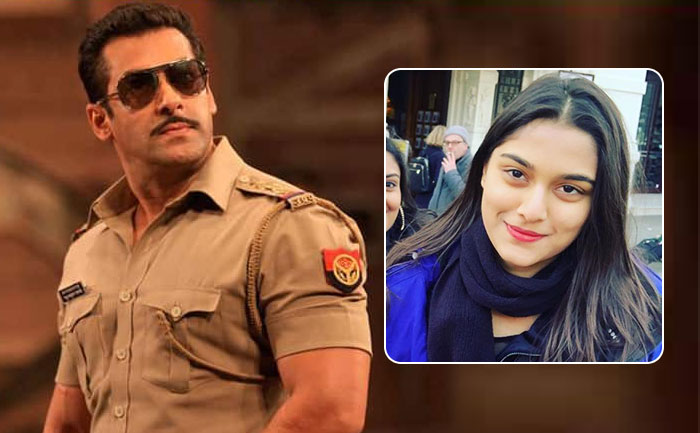 As we have earlier reported that Salman Khan will be seen playing two different avatars shuttling between his twenties to becoming Robin Hood cop. We will once again get to see Sonakshi Sinha returning as Rajjo in the third instalment of the Dabangg franchise. Salman Khan, who is known for introducing new faces to Hindi film industry, has reportedly launched Mahesh Manjrekar’s younger daughter, Saiee in Dabangg 3.

According to a report in Mumbai Mirror, Salman Khan will be seen romancing the daughter of Mahesh Manjrekar in Dabangg 3 in his younger avatar. “She plays Salman’s love interest and her role is primarily in the prequel. However, life comes full circle as the character has relevance to the conflict Chulbul is battling in the present,” a source told the publication.

Dance class from the master himself . . Prabhu Deva @kichchasudeepa @wardakhannadiadwala

Earlier there have been rumours flying high that Mahesh’s elder daughter is being considered for the role. As per the Mumbai Mirror, currently, she does not have any plans to debut in Bollywood. The latest report confirms that Saiee who always wanted to be an actress has already filmed a major chunk of her portions with Salman Khan.

The source further added that a song will be picturized on Salman and Saiee too. Salman Khan who has recently delivered a super hit movie, Bharat is currently working hard on his physique to look younger and fitter. The cast of Dabangg 3 is currently shooting in Phaltan on the outskirts of Maharashtra. It’s a week-long schedule. Apart from Saiee, Kanaada actor, Sudeep is making his comeback in the film industry after so many years.

“His character is more like the parallel lead rather than the stereotypical villain. He starts off on a positive track but situations eventually turn him into the bad guy. He is involved in a Tom and Jerry fight with Salman and there are several confrontations scenes between the two,” the source told the leading tabloid.

Directed by Prabhu Deva, Dabangg 3 is scheduled to hit the theatres on Christmas 2019.