Home > Entertainment > Sanjay Dutt and Maanayata Dutt are all smiles as they celebrate Diwali with Mohanlal; See pics

Sanjay Dutt and Maanayata Dutt are all smiles as they celebrate Diwali with Mohanlal; See pics On Sunday, Sanjay Dutt, his wife Maanayata Dutt, and their kids Shahraan and Iqra celebrated Diwali this year with south star Mohanlal, they were also seen happily pose for the picture.

Mohanlal shared the photo, in which he was all smiling with Sanjay, his wife, and his friend Sameer Hamsa, in the photo, Sanjay was seen pointing towards the cameraperson when the photo was clicked,  the south star was seen wearing a red t-shirt, he captioned the photo as, “Diwali 🌟🪔 @duttsanjay”

In another photo, Mohanlal and Sanjay Dutt were seen joining hands as they talk.

The south star also posed for a happy picture with Dutt’s kids. 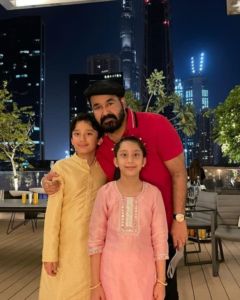 On October 12, Dutt announced that he has recovered from cancer, and also expressed gratitude to all the fans, he wrote, “The last few weeks were very difficult time for my family. But like they say, God gives the hardest battles to his bravest soldiers. And today, on the occasion of my kids’ birthday, I am happy to come out victorious of the battle and be able to give them the best gift I can – the health and well-being of our family.”

“This wouldn’t have been possible without the unwavering faith and support from all of you. I am eternally grateful to my family, friends and all the fans who have stood by me and been my source of strength through this trying time. Thank you for the love, kindness and the countless blessings that you have sent my way.”

My heart is filled with gratitude as I share this news with all of you today. Thank you 🙏🏻 pic.twitter.com/81sGvWWpoe

Mohanlal recently wrapped up the shooting of his superhit film ‘Drishyam’s second installment. Whereas, Sanjay will be seen next in the action flick KGF: Chapter 2

Birthday Special: 7 photos of Aditya Roy Kapur that are a treat to the eyes