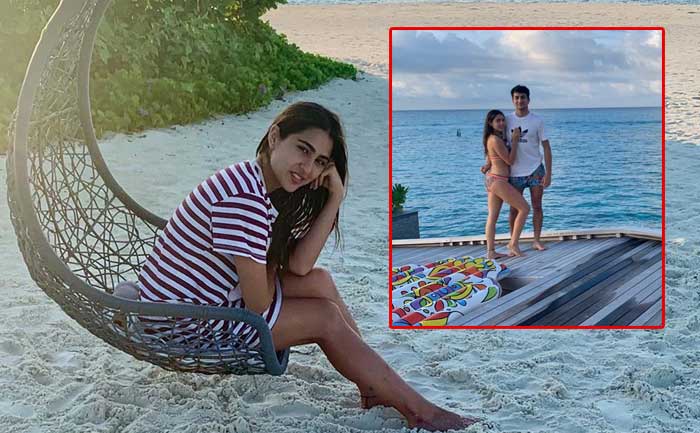 Bollywood actress Sara Ali Khan got heavily trolled for wearing a bikini on the beach along with her brother Ibrahim Ali Khan. The actress had shared two unseen pictures on her social media pages to wish her brother Ibrahim. on his birthday, but netizens are not impressed with them. They expressed their unhappiness and their feelings by posting comments on her picture.

Sara had posted two pictures in a bikini with her brother from their vacation to wish him on his birthday. In one the brother-sister duo are looking towards the camera. But it is the other that has left fans upset. In the second picture, Sara is seen giving Ibrahim Ali Khan a side hug while striking a pose along with the scenic background.

Sara had captioned the image as, “Happiest birthday Brother ? ? ?? I love you more than you know and am missing you lots today!! Wish I was with you ? #tbt.”

Happiest birthday Brother 🎂 🍰 🎁👫 I love you more than you know and am missing you lots today!! Wish I was with you 🤗 #tbt @ncstravels @luxnorthmale

No sooner did she post the pictures she was slammed. Netizens feel Ibrahim is quite uncomfortable with the pose. They also note the posture of his hand and his expression. One said “Her brother is not comfortable… look at his hand… not fair Sara… not expecting from you…,” wrote one user.

Another blamed the parents, “Fame and money descend people to this extent never imagined, if the children don’t know the elder at least should tell what’s wrong and what’s right, the culture is going towards worse (sic).”

Another user went below the belt as they wrote, “Hindu ka to smjh ata hai…sara u r muslim..kindly change ur religion if u wna get naked infront of ur brother father.”

“Her brother is not comfortable… look at his hand… not fair Sara… not expecting from you…,” wrote one user.

Many of Sara’s fans appreciated her look and found nothing wrong with the picture. Many even commented, what is she expected to wear in a pool if not a bikini? Some even wrote, This is the 2020’s and Sara has the choice to wear whatever she wants irrespective of her religion.

On the work front, Sara will next be seen in Coolie No 1 co-starring Varun Dhawan. She also has Atrangi Re with South star Dhanush and Akshay Kumar.