A photo of Sara Ali Khan is certainly going viral as netizens spot a 'love bite' on her body. 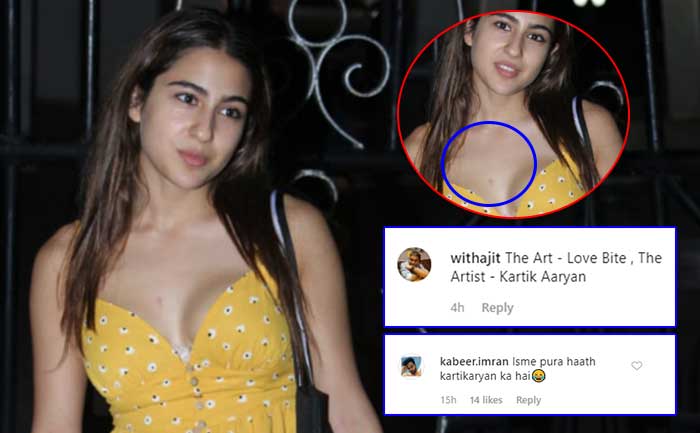 Bollywood actress Sara Ali Khan is currently gearing up for her upcoming film Love Aaj Kal which will be hitting the screens on 14th February 2020. Sara Ali Khan and Kartik Aaryan are playing the lead role in Love Aaj Kal.

Sara Ali Khan was recently spotted and clicked by the paparazzi in Mumbai. In the pics, Sara was dressed casually in a pair of denim shorts and a yellow floral printed top with a deep neckline. But what caught everyone’s attention is a small spot right below her neck and netizens began assuming it to be a ‘love bite’. Not only that but they also connected it with Kartik Aaryan who is rumored to be dating her.

Take a look at the pictures:

Here are the comments:

Well, we don’t know the fact and we don’t wish to judge as well.

Talking about Love Aaj Kal, it features two different eras (1990 and 2020), which also emphasizes the complications that people face while dating someone. Notably, Kartik and Sara will be sharing the screen space for the first time.

The original ‘Love Aaj Kal’ version was released in 2009 which starred Saif Ali Khan and Deepika Padukone in the lead roles.

The film is being helmed by Imtiaz Ali and it is produced by Dinesh Vijan. The romantic drama also stars Randeep Hooda and Arushi Sharma in the key roles.

Love Aaj Kal is slated to hit the silver screens on the occasion of Valentine’s Day i.e February 14, 2020.