Post the success of Lion King, Shah Rukh Khan and his family takes a trip to Maldives. 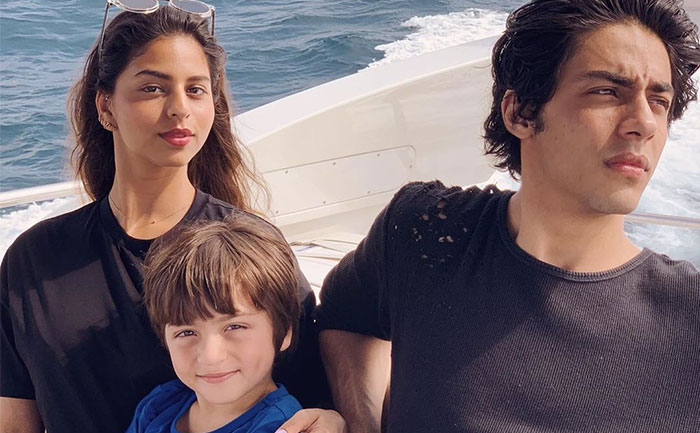 Shah Rukh Khan and his wife Gauri Khan along with their three children had recently jetted off to the Maldives for a family vacation. Shah Rukh Khan and Gauri have posted many pictures of their kids Aryan Khan, Suhana Khana and Abram. In one of the pictures shared by Gauri Khan, Aryan, Suhana and AbRam are seen posing but the reaction of Aryan Khan has caught netizen’s attention.

In the image, Suhana and AbRam are seen smiling at the camera, whereas Aryan is not posing like his siblings. One can also see, Aryan and Suhana twinned as usual by wearing blacks but little AbRam picked a bright blue T-shirt for the boat ride. The three seem to enjoy the combination of sun and blue water sea on their way back to the airport.

Taking to Instagram, Shah Rukh has shared a selfie video from the boat ride.

Feeling bad having to leave Maldives and especially all the wonderful people at #JumeirahVittaveli. Thank u for a lovely holiday @jumeirahvittaveli will miss u all. @makeplansholidays

While Suhana recently finished her school, Aryan just voiced the character of Simba in the Hindi dubbed version of The Lion King. SRK voiced the father of Simba, Mufasa in the movie. This Hindi version of the movie is being loved by the fans all over India. The Lion King has opened to a substantial number at the Indian box-office, earning Rs 30.21 crore on Friday and Saturday.

Shah Rukh Khan took some time out to thank the people he worked in The Lion King as well as his fans on microblogging site, Twitter.

So happy to hear that so many r enjoying Lion King. A special thanx to my coactors & friends for bringing this film to life in Hindi. @imsanjaimishra @shreyastalpade1 & the amazing @AshishVid & #asrani sahib. Thx for making me & Aryan sound good!