Shahid Kapoor And Mrunal Thakur Are Currently Gearing Up For The Release Of Their Film, 'Jersey'. The Duo Celebrates The Shoot Wrap Of This Upcoming Sports Drama Bollywood handsome hunk, Shahid Kapoor has been gearing up for the release of his cricket drama, ‘Jersey’. The actor has been constantly treating his fans with behind-the-set pictures. This time around he reveals about the shoot wrap with a picture. The actor celebrates the completion of shootings with Mrunal Thakur and the crew members.

Shahid Kapoor took to his Instagram stories and shared a picture from the sets of ‘Jersey’. Dressed up in their casual ensembles, Shahid, Mrunal and the crew members could be seen having a cake cutting session on the sets. The actors can be seen cutting a bat shaped cake wearing the face masks. “14th December 2019 to 14th December 2020.. This is my dream team. Each one of them has my deepest gratitude,‘ wrote Shahid on his picture post. 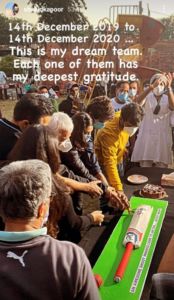 For you excited for the release of this film? Do let us know.

‘Jersey’ is the remake a Telugu film, titled the same. The Hindi remake is being directed by Gowtam Tinnanuri. In this sports drama, Shahid will be seen portraying the role of cricketer who aspires to play for the Nation. He decides to get back to the Indian Team after a long gap of 10 years.