Shahid Kapoor treats his fans with lovely pictures from his new house. He shares the morning view of Bandra-Worli sea featuring his wife, Mira Rajput

Shahid Kapoor and Mira Rajput are one such couple in B-town, who never fail to treat their fans with adorable PDAs.Time and again, the two of them have been sharing pictures to shell out major couple goals. This time around, the Kabir Singh fame shares an eye-grabbing picture of his wife, Mira from their new house. We must say that the new house has a beautiful facing of the Bandra-Worli sea link.

Shahid Kapoor took to his Instagram stories and shared the pictures with his fans. Mira can be seen smiling at him. Dressed up in a casual white top alongside blue jeans she looks beautiful. The actor captioned his post, “Wake up @mira.kapoor.” On the other side, Mira reposted the same picture on her handle and wrote, “Ways to say good morning.”

Here check out their pictures: 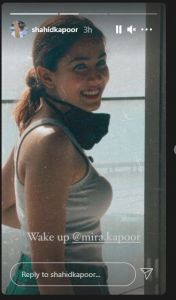 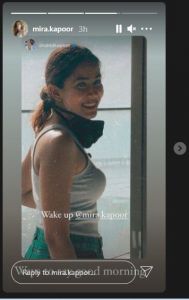 For the unversed, there were reports in 2018 that Shahid Kapoor and Mira Rajput have been looking for a new house. The actor was even spotted visiting the construction site alongside his father. Reportedly, they have purchased this house for Rs. 56 Crores. It is apparently a duplex house on the 42nd and 43rd floors. In the latest social media pictures, the couple appears to have moved into this new house and they appear having a gala time together.

Sonam Kapoor to make her digital debut with ‘Blind’