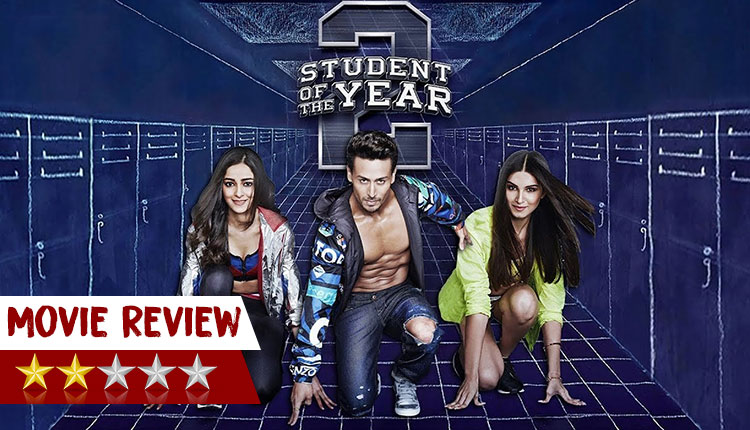 Karan Johar’s ‘Student Of The Year 2’ hit the screens today. After the massive success of the first installment, people may want to watch this film as well. But seems like it would be regret for those who have little time to spare.

The film starts off with the beautiful backdrop of the lush greenery in Mussouri. Then we come across some students strutting across the school campus of St. Teresa in designer wear. This is something that we all could wish as a child but the dream of hyper-reality is always realized in films by Karan Johar.

The film is a ‘Two’ some love story with 4 main characters in focus. While Rohan (Tiger Shroff) is from a not so well to do college, he gets through St Teresa through sports quota. Basically, his motive to get through this college was to be with his childhood love Mridula aka Mia (Tara Sutaria). Then we have the spoilt rich kid Manav (Aditya Seal) and his brat sister Shreya (Ananya Panday). They keep falling in and out of love just like emptying and refilling a water bottle repeatedly. The students who could enter a beauty pageant all together because of their looks are certainly more focussed in sports. They are all gearing up for the ‘Student Of The Year’ trophy and are scaling heights to reach their goal. Because their biggest competition revolves around sports, seems like the word textbook never existed in the dictionary written by St Teresa.

While the songs are great with the foot-tapping beats to its name, Tiger Shroff and his abs are certainly a sight for the eyes. The songs like ‘The Jawaani Song’ and ‘Jatt Ludhiyane Da’ are great and good for the youth to be seen in the theatres.

Tara Sutaria’s character isn’t that well crafted in spite of amazing stage presence. On the other hand, Ananya Panday who has less screen time than Tara Sutaria seems to be great in her character and delivers to the best of her capacity.

Tiger Shroff has almost a constant expression at all times. But then he some killer dance moves. Getting to look at his shirtless for the most part of all the dance sequences is just a big boon for all the girls. But our secondary lead i.e. Aditya Seal gave the best performance out of all in playing the role of the spoilt rich brat.

Overall, the film is meant for those who like living in the world of riches and fantasy. Watching the film will make you question whether you are there to have a good time or regret wasting your time and money over it if you are an extremely pragmatic and practical person.

Final Verdict of the film is to stay away if you care for your mental health.

Here is the trailer of the film.

Also Read: The latest track by SOTY 2 is so good!!