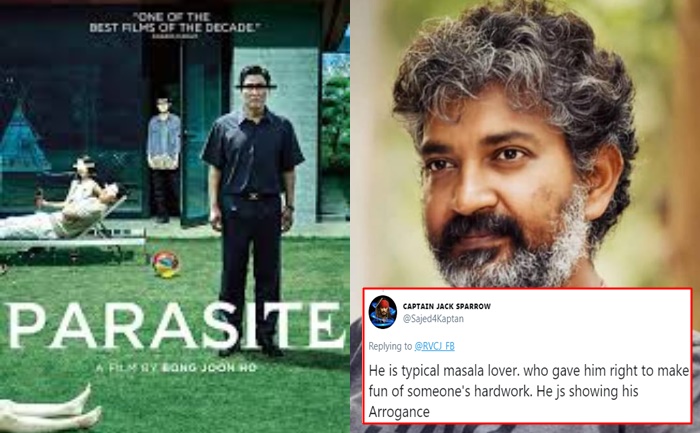 Not everyone has the same taste in cinema. What I personally like may not be like by others. Everyone has their opinion, isn’t it? Well, SS Rajamouli had recently shared his views about Bong Joo-ho’s Oscar-winning movie Parasite. The Baahubali director apparently said that he started watching the film at night and he slept off as he found the movie a ‘little slow’. According to News18, Rajamouli said in the interview, “Parasite didn’t work much for me. I felt the film was a little slow in the beginning. We started watching the film a little bit late around 10 pm, and so halfway through, I dozed off and slept.”

This didn’t go well with a few Twitter users specially who loved Parasite. As a result of which SS Rajamouli had to face the criticism of netizens. He was trolled on Twitter.

One user wrote, “What do you expect from the guy who makes hero-worshipping movies who comes from the mass masala movie industry. Not expected from India’s no.1 director.”

#Rajamouli calls #parasite boring.what do you expect from the guy who makes hero worshipping movies who comes from the mass masala movie industry.not expected from india’s no.1 director.
Ps:i felt it wasn’t an oscar worthy movie too just like birdman

I slept also during Bahubali. Nothing new.

He is typical masala lover. who gave him right to make fun of someone’s hardwork. He js showing his Arrogance

#parasite
I think ss rajamouil sir should not have told that in the tv show. That’s problem.
But in my of point view, I consider a movie as a masterpiece when it hunts me for days. Parasite movie is still hunting me the day I watched it.for me a masterpiece