As the world celebrated Father’s day on June 20, Bollywood celebrities too did the same. Shah Rukh Khan’s daughter Suhana Khan sent a cute Fathers Day greeting to her dad all the way from New York. The youngster shared a childhood picture of herself, in which she can be seen kissing her father.

Shah Rukh Khan soon responded to the wish with an adorable message. Sharing the same picture on his Instagram story King Khan wrote: “Miss you baby so much that I am using emojis.”

Suhana took to her Instagram handle and simply captioned the picture as “Father’s Day.”

Check out the post shared by SRK on his Insta Story here: 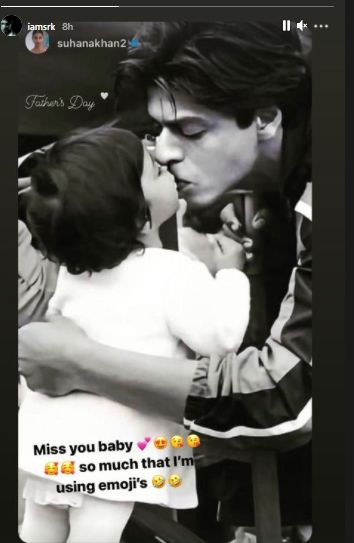 Shah Rukh Khan also wished his fans on the occasion of Father’s day. Sharing a unique the Badshah captioned it with these words: “Happy Father’s Day to all fathers. Here’s wishing all parents the most beautiful moments and memories with their ‘lil naughty munchkins’.”

On the work front, Shah Rukh Khan will be seen on the big screen after a long hiatus. He will be seen in Yash Raj Films Pathan. The action drama has Deepika Padukone as the leading lady. John Abraham is playing an antagonist while Salman Khan is also a part of the movie. He will be seen in an extended cameo.

Father’s Day 2021: Kylie Jenner wishes Travis Scott, says ‘so blessed to have you’