This Rs 500-cr diamond shaped like a Ganpati is a big draw in Surat. Deets Here 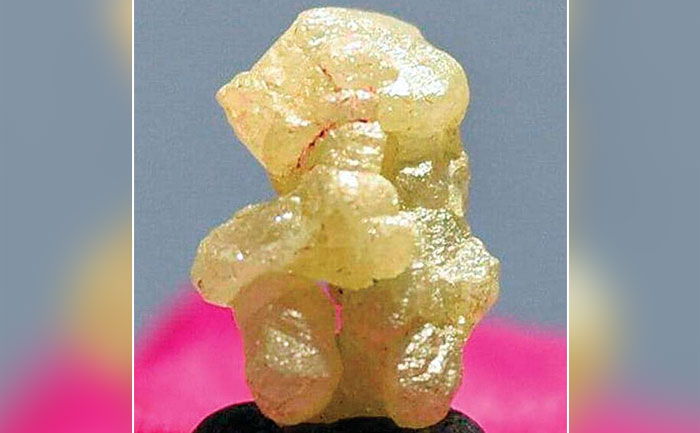 Ganesh Chaturthi is being celebrated across India as the birth of Lord Ganesha. People welcome the Lord to their homes and worship him for ten days. There are many popular Ganpati’s where devotees throng to pay their respect. From Lalbaughcha Raja to Dagdu Sheth in Pune, there are many such and one of them being the diamond Ganpati of Surat.

Yes, an uncut diamond that looks like a Ganpati idol is a major attraction in Surat these ten days. Devotees form large queues to catch a glimpse of the idol that belongs to a Surat businessman. It is not immersed as the value of the uncut diamond is around Rs. 500.

Rajesh Panday had bought this idol for Rs. 29,000 in 2005. The businessman who lives in Katargam locality of Surat said that it had arrived in India as part of an auction from Mbuzi mine in Congo that year. When he opened the packet, the diamond looked like a Lord Ganesh idol. He took it home and the family decided to worship the 24.11 mm tall and 16.49 mm wide, made up of 27.74 carats on Ganesh Chaturthi.

But sadly the family has decided that this will be the last year that they will display it. This is due to their concern regarding its safety.

Rajesh Panday said that the diamond industry is passing through turbulent times and it is a big challenge for them to protect the Ganesha-shaped rough diamond from unscrupulous elements. Only close friends and family members will be allowed for darshan. It will be only for two days.

The family will sprinkle the water from river Tapi on Tuesday as part of their ‘immersion’ ritual. Later the diamond will be kept in a safe deposit vault.