Tiger Shroff treats his fans to a stunning surprise on his 30th birthday. Check it here 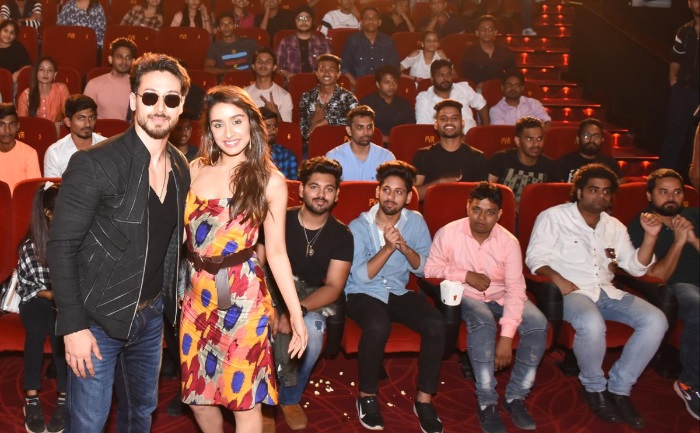 While all stars love their fans and like treating them to special surprises, rarely do you find one going out of his way to shock and thrill them by planning something really extra special – that too on his birthday. Tiger Shroff, who celebrated his birthday by launching the theme song of Sajid Nadiadwala’s Baaghi 3 with them on Monday, went a step further and showed the entire film to the fans who requested the actor to show them the film!

On Monday, his fans were called for the launch of the theme song of Baaghi 3, Fit To Fight, at PVR, Juhu in Mumbai. The lead actress, Shraddha Kapoor and Riteish Deshmukh (who plays Tiger’s elder brother in the movie) were also present. The fans had earlier requested to watch his film, Baaghi 3 and Tiger then taking their plea further, requested director Ahmed Khan and Producer Sajid Nadiadwala. The two agreed and got the prints loaded in the theatres in 30 minutes. All this could happen in a jiffy since it was Tiger’s birthday. This is the first time ever that a film has had a preview four days before its release and has been shown to the fans.

The event was a fan frenzy and needless to say, the excited (and lucky) bunch of fans who got to see Baaghi 3, four days before the release, simply loved the film. The atmosphere soon filled with claps and whistles by the fans who were elated to catch the star on the screen. The high-octane, action thriller shot all over beautiful locales abroad and with sensational stunts performed by Tiger had all the fans exclaiming in wonder and awe at the sheer scale and grandeur of the film.

Tiger was extremely moved and thrilled to know that his fans loved Baaghi 3 so much.

Also Read: Baaghi 3: TroyBoi slams Makers For Plagiarising His Song ‘Do You’