Varun Dhawan and Natasha Dalal recently got papped at the airport. On Friday, he shared an adorable picture with his wife from their vacation Varun Dhawan and Natasha Dalal never fail shelling out major couple goals to their fans. On Thursday (September 16), the couple made a stylish splash at the airport. They were spotted carrying a heavy luggage along. It is speculated that they were on their way to honeymoon, however, he didn’t officially confirmed anything as yet. Today he posted an adorable picture with her and it appears they are having a gala time together on their speculated vacation.

Varun Dhawan took to his Instagram handle to share an adorable picture with wifey, Natasha Dalal. She is dressed up beautifully in printed white dress and he complimented his lady love in a shiny blue shirt. Both of them are all smiles for the pics and it appears they were having a lovely brunch. He captioned the picture, “The only way I know I’m alive.” 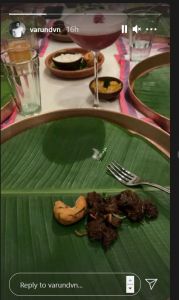 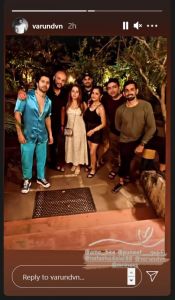 Varun Dhawan and Natasha Dalal got married as per the traditional Indian wedding ceremony. Their fairytale wedding took place at Alibaug’s The Mansion House in January. The wedding festivities were a private affair because of the COVID-19 restrictions. The two of them didn’t make many public appearances ever since they got married. But Varun keeps sharing lovely pictures with her on his social media handles. Their recent airport appearance made fans speculate if they are on their honeymoon vacation.

Also Read:  Varun Dhawan And Natasha Dalal Gets Papped At Airport; They Head For Honeymoon?