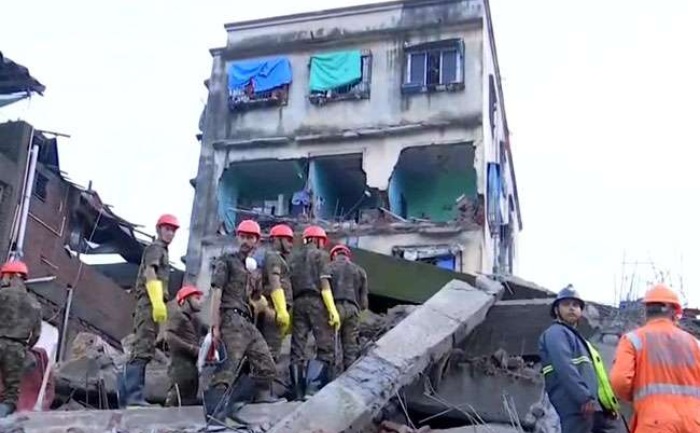 Two people were killed and many are feared trapped after a four-storey building collapsed in Maharashtra‘s Bhiwandi on Friday night. Four injured people have been admitted to a hospital. The injured have been rushed to the Indira Gandhi civic hospital. The two deceased were identified as Siraj Anwar Ansari, 26, and Mohammad Aaqib Ansari, 27.

Maharashtra: Rescue operations continue at the building collapse site in Bhiwandi. The incident has claimed lives of 2 people so far. pic.twitter.com/hSLXoVlmn5

After cracks were seen in the ‘illegal” building, the municipal agency had evacuated 22 families on Friday night. However, some people went back into the building to collect their belongings. That was when it collapsed, trapping them, officials said.

Commissioner of Bhiwandi-Nizampur Municipal Corporation, Ashok Rankhamb said, “We had received a message that column of the building might dismantle. Our emergency team reached here and after examination, they found that the building might collapse.”

He further added, “As soon as we came to know about the plaster collapse and cracks developing in the building, we evacuated all the families safely. However, some residents forcefully went inside to remove their belongings and the building collapse. The building does not have a name. We will file an FIR against the builder for negligence.”

Ashok Rankhamb: We vacated the entire building but some people entered the building without permission. It was then the building collapsed. 4 people were rescued, of them one died. It’s an 8-year-old building & was built illegally. Investigation will be done. https://t.co/UhX0OSVTxX

At least 15 people are still feared trapped in the debris. Rescuers of the National Disaster Response Force (NDRF) are at the site and looking for survivors amid the concrete debris of the building that was built eight years ago.

Two fire officials were also injured in the incident.