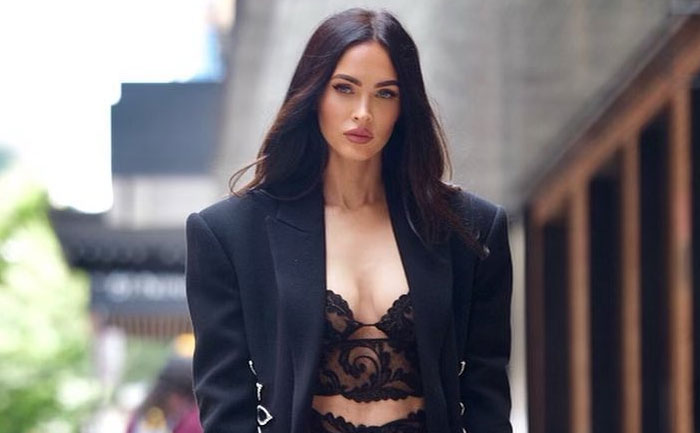 The MTV Video Music Awards 2021 took place at Brooklyn’s Barclays Center, New York on Sunday night. The elite ceremony was hosted by Doja Cat.MTV VMA’s red carpet saw the most glamourous looks by the biggest celebrities from the music industry. But all eyes were on Megan Fox and her beau Machine Gun Kelly. Megan rocked the Red Carpet in a bold and sexy Mugler dress.

Megan set tongues wagging as she arrived at the awards night wearing a complete sheer custom Thierry Mugler dress styled by Maeve Reily. Both Machine Gun Kelly and Megan shared pictures of their looks on Instagram.

The 35-year-old actor wore the sheer number with a bedazzling thong underneath. She accessorised her look with a pair of Jimmy Choo pumps and Lorraine Schwartz jewels. Megan finished off her resiqué look with a middle-parted wet wavy hair.  Nude lip shade and blushed cheeks completed the glam look.

While her beau the rapper was seen in a bold and bright red metallic suit with pearl accents on his face. His ensemble came adorned with sequin embellishments and fringe details.

Megan and Machine Gun Kelly’s romance rumors were sparked by Fox’s appearance in Kelly’s music video “Bloody Valentine.” The couple had stepped out for a PDA-filled evening at the Billboard Music Awards in Los Angeles.