Check out the leaked video of Aamir Khan & Elli AvrRam dancing during the shoot of a 'Koi Jaane Na' song. 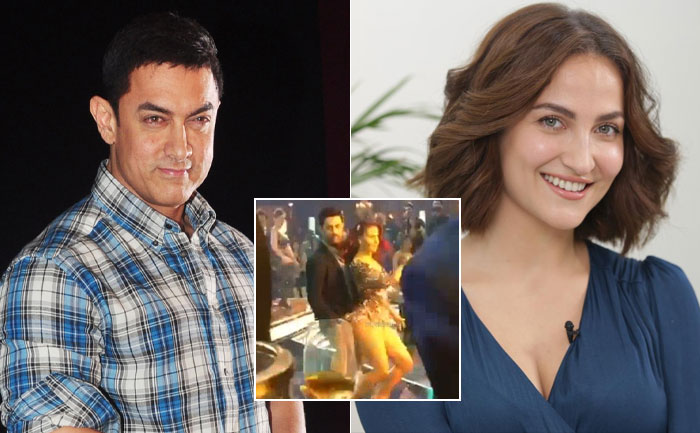 Aamir Khan has jetted off to Jaipur for the shooting schedule of Amin Hajee’s movie ‘Koi Jaane Naa’ in which he will be making a special appearance. Now, a leaked video of his dance sequence with Elli AvrRam from the film is doing rounds on the internet.

According to a source quoted in Pinkvilla, “Being a perfectionist that Aamir is, he rehearsed for the song for a few days with Bosco Martis’s team before shooting for the final number. A special club set was erected in Jaipur where the song has been filmed. The team is very excited about this one.”

The video was leaked by Pinkvilla’s page and the duo is seen grooving on a club number which is surely set to become a party number. From what can be inferred from the video, it is a peppy song, set in the backdrop of a party mood. Reportedly, Aamir’s upcoming song is composed by Tanishk Bagchi, while Amitabh Bhattacharya has penned the lyrics. Bosco and Caesar have choreographed the same.

‘Koi Jaane Na’ features Kunal Kapoor and Amyra Dastur in the lead role. It has been helmed by Amin Hajee who happens to be a good friend of Aamir Khan, produced by Bhushan Kumar.

On the work front,  Aamir is currently shooting for ‘Laal Singh Chaddha,’ also stars Kareena Kapoor Khan. It is an adaptation of the 1994 American film Forrest Gump, which itself based on Winston Groom’s 1986 novel of the same name.